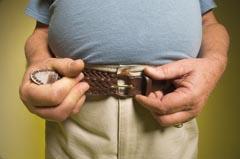 In 2008 more than 20 per cent of the adult UK population is obese and in the US two thirds of adults are either seriously overweight or obese. The causes of this 'epidemic' are not hard to find given the growing preference for energy-dense and nutrient-poor foods, coupled with a sedentary lifestyle.

Obesity is linked to an increased risk of type-2 diabetes, hypertension, cardiovascular disease and several cancers, including those of the colon, prostate and breast. Yet for most overweight people the solution should be simple - change of diet and increased exercise - but in reality the majority of overweight people find it difficult or impossible to change their lifestyle. Hence the need for anti-obesity drugs.

There are currently two anti-obesity drugs on the market. Orlistat (Xenical) (1) acts by blocking fat absorption from food as it passes through the gut. However, it is not popular because it can cause incontinence and leads to what is delicately described as 'faecal urgency'. The other is sibutramine (Meridia) (2), which increases the levels of the catecholamine neurotransmitters by inhibiting their re-uptake into neurones, and this leads to a feeling of fullness. Unfortunately the drug's side effects include headache, constipation, insomnia, and high blood pressure. Clearly there is huge scope for alternative drugs.

The brain is central to the balance of food intake and energy use, and has to integrate a whole array of incoming signals, ranging from visual (the sight of food), through those that indicate the energy status of the body (insulin from the pancreas and leptin and adiponectin from adipose (fat cells) tissue), to those that indicate the feeling of fullness (stretch receptors in the stomach).

The peptide leptin caused excitement when it was discovered in 1994 since it was soon established that the levels of circulating leptin correlated to levels of body fat and that it normally acted to lower food intake. Obese individuals seem to be relatively unresponsive to the effects of leptin and attempts have been made to enhance their sensitivity to this natural peptide.

Other endogenous peptides released by the pancreas, eg amylin, and the gut, eg appetite-suppressing hormone, have been targeted for investigation but with little success thus far. One drug that has recently been approved for use in Europe is rimonabant (Acomplia) (3), which acts at the cannabinoid receptor CB1 (also the site of action of the natural cannabinoids from Cannabis sativa).

Scientists have known for some time that there are a number of endogenous lipids, derived from the 20-carbon fatty acid arachidonic acid, that regulate energy use and food intake through association with cannabinoid receptors both in the central nervous system and in adipose tissue. Acomplia is an antagonist at the CB1 receptor and when used in conjunction with dieting and an enhanced exercise regime can lead to substantial weight loss. However, once again the side effects can be unpleasant and include nausea, dizziness, diarrhoea, and even depression.

For the moment at least, the best course of action for those wanting to lose weight would be a reduced food intake and increased exercise.