Around 29,000 people flocked to the Big Bang at London's ICC ExCeL Centre

Around 29,000 people flocked to the Big Bang, the UK's largest single celebration of science, technology, engineering and mathematics for young people, at London's ICC ExCeL Centre on 10-12 March.

The event offered a huge range of interactive events, activities, workshops, shows and presentations, bringing together 150 different organisations with the shared aim of inspiring the next generation of scientists and engineers.

Highlights included live shows from the BBC's Bang Goes the Theory and Sky One'sBrainiac. Organisations with hands on displays included Welding with Chocolate from TWI, Wallace & Gromit's World of Invention Roadshow and Liquid Crystals: From Flat Panel Screens to Living Cells from the University of Manchester.

The event is followed up by a series of regional fairs taking place around the country this summer. More information and registration details can be found on the website.

The national fair in March also hosted the finals of the 2010-11 National Science and Engineering Competition (NSEC). Showcasing their entries at the ExCeL Centre, the finalists were judged over a period of two days.

Declan Fleming, an RSC teacher fellow based at the University of Bath was one of the judges at the finals of the senior chemistry section. He gives us a taste of the excitement in excerpts from his blog, below.

As a teacher fellow Declan gives academics the benefit of his teaching experience, his knowledge of the curriculum and contributes to their understanding of students' abilities and experience. He undertakes a variety of projects to help ease the school-to-university transition.

Commenting on his fellowship, Declan said 'This has been a great opportunity to communicate my love of chemistry to a massive range of people and age groups, to develop my subject knowledge, to have time to reflect on my teaching, to accomplish things I would never have had the time to time to do and to have some small impact on wider chemistry education'.

Judging the NSEC at the Big Bang

These 16-18 year old students were each presenting projects which, almost without exception, could easily have passed for first-class masters-level research and I'm not too proud to say that a lot of them lost me on more than one occasion! 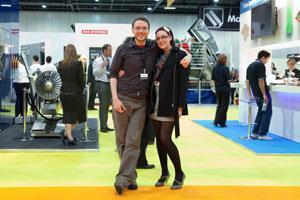 They're clearly at the top of their game, many of them producing work that's not only impressive in its own right but will open up new avenues of research. I was astounded at what they had managed to produce in between 4 and 9 weeks, some of them with little to no supervision.

Nathan Katz, from Hills Road Sixth Form College, Cambridge, had been trying to extract and crystallise the protein PERK from pancreatic cells to help us better understand the ways in which they react to stress, so we might better treat diabetes. Nathan went on to collect a 'Highly Commended' in the overall Young Scientist prize so did very well!

The judging process was pretty easy for most of the projects. Although I'd only been asked for a ranked 'top 3', I had quickly been able to place all the projects in order... with the exception of the top two!

The first was Hannah Eastwood from Loreto College. Her project was looking at a way of producing lepidocrocite for use in removing heavy metals from water. This was proper science fair stuff! She'd been intrigued by a story she heard on the radio about the use of this particular iron oxide-hydroxide mineral. She'd had the foresight to hook up her home-made self-delivering hydroxide mechanism to a data logger and ended up with a voltage/OH- diagram that revealed the existence of never-before-seen intermediates in the formation of the mineral.

I met Saranja Sivachelvam from Bancroft's school - potentially the most driven chemist I have ever met. The work she was presenting was the result of the time she spent at Cambridge looking at ways to control the formation of different polymorphs through the use of cocrystals. It was clear from the off that her project had massive potential and would have real impact on the area.

I was totally torn between the two girls. In the end, I went with Saranja who had had a lot longer but had produced a staggeringly vast body of incredibly valuable work. I was glued to Twitter on Friday night hoping to hear that Saranja had won a lot of other prizes so they'd given the Chemistry prize to Hannah, my second choice so they could both win. As it turned out, I did get to have my cake and eat it. Hannah had been awarded the overall Young Scientist of the Year prize! I was so happy!

Can you capture a chemist?

Another project that Declan is involved with is Capture a Chemist - a crowd-sourced chemistry engagement arts project.

The aim is to promote the understanding of the role played by chemists in society, by bringing together chemists and the worldwide photographic community and through them, the wider public.

There are plans to hold a public exhibition of the best submissions along with their attached stories, as part of the International Year of Chemistry.