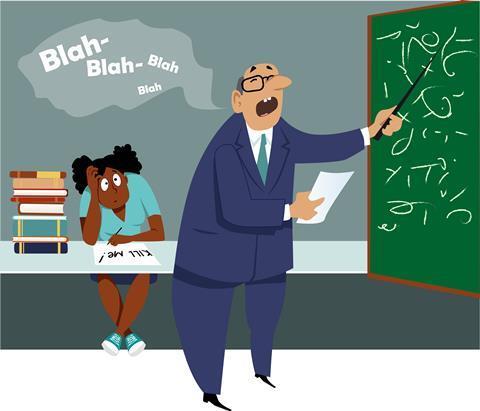 Researchers from Durham University, Patrick Barmby, Per Kind and Karen Jones, studied two prominent patterns in students' attitudes to science: the steady decline in students' disposition towards science as they go through secondary school; and boys' more positive attitude to science compared with girls.1 The researchers used an 'attitude' questionnaire, which produces information on students' views on learning science in school, practical work in science, science outside school etc.

In total 932 students in Years 7, 8 and 9 in five schools in different parts of England completed the questionnaire and the researchers interviewed 44 students to get their views on science. The researchers analysed the data using standard statistical techniques to show the changes in students' attitudes towards the science they experience.

Results from the study confirmed previous work on trends in age and gender. In Year 7 there was very little difference between the attitudes of boys and girls but by Year 9 girls' interest in science was significantly lower than boys. Boys and girls showed large declines in their attitude towards learning science in school over the three years but this was far more pronounced for girls than boys. In contrast to a large decline in girls' attitude to science outside the school, there was only a small decline for boys. Over the three age groups boys' attitudes to practical work in science improved slightly whereas girls' attitudes in this area declined.

The interviews shed further light on students' views of practical work. In line with previous findings, the students said they enjoyed hands-on practical activities but commented that they rarely did any practical experiments. Whether or not the students enjoyed a particular experiment depended heavily on whether they understood the science and the teacher's explanation.