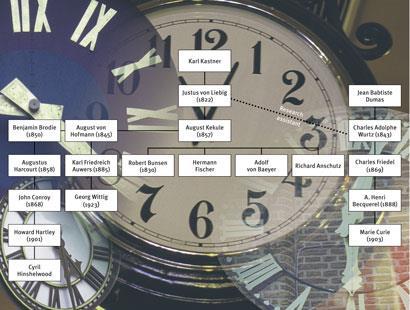 For a potential postgraduate student, choosing a PhD supervisor can be as weighty a decision as the project itself. However, our supervisors had to make the same decision.

If we map the student-supervisor relationship from a single chemist, it is possible to create an academic lineage which stretches back through history and provides a timeline of a single student's academic heritage. If we map the lineage of all students, we can create a whole academic genealogy of chemists.

Chemistry Connections is a growing database of over 7000 academic records, linked through student-supervisor relationships. Each record contains details of when and where a student received their PhD, who they studied under, and includes a brief biography.

This data has so far been kindly donated from various sources including John Andraos at York University, Toronto, Vera Mainz at University of Illinois, Urbana-Champaign and the Chemical Heritage Foundation.

So, who supervised who?

The timeline of the chemical sciences is as complicated as it is fascinating. Historically the concept of the PhD was not as well-defined as it is today, with many scientists becoming influential in different disciplines often outside of science. However, it is possible to extend a lineage back to the Renaissance in Europe and witness the shifts of scientific influence from Italy, to Germany, France, Britain and beyond.

As an illustration, we can trace the 1911 Nobel Prizewinner, Marie Curie's lineage back through Henri Becquerel. He was supervised by Charles Friedel who helped develop the Friedel-Crafts Alkylation reaction with James Crafts in 1877. From here we can go back even further to Justus von Leibig who earned his PhD in 1822 and is believed to be the founder of modern laboratory teaching methods.

You can read this story in full at RSC News.

Where do you fit in?

Through this, we have linked some of the most significant chemists in history, providing an insight into academic relationships of their era and following the movements of intellectual influence throughout the world.

You can trace your own academic lineage, and to help build up a global and historical picture of chemical scientists. Go to the MyRSC group for a guide to getting started on Chemistry Connections.