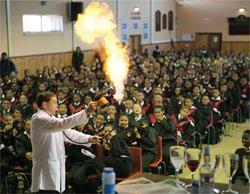 Stephen Ashworth from the school of chemistry, University of East Anglia, recently returned from South Africa, where he travelled more than 2000 miles in two weeks to present chemistry science shows and workshops at schools in remote parts of the country's Western Cape and Northern Cape provinces.

In his Kitchen chemistry science show and workshop, Stephen used inexpensive consumables and unsophisticated equipment, available from any supermarket, pharmacy or hardware store. He demonstrated how chemistry can be taught in an exciting and engaging way, with easily accessible resources.

Stephen presented his science show at Scifest Africa, South Africa's National Science Festival, in May this year. It was so well received, that educators around the country insisted Scifest Africa invite him to return, so he could continue to delight learners and inspire educators.