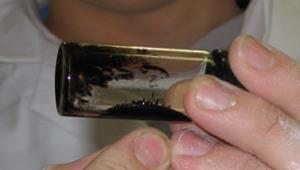 ChemNet members from three schools in the northwest of England got to do nanoscale science at a series of workshops at the University of Liverpool. Held in SchoolsLab, a lab devoted to use by groups of visiting school and sixthform college students, the workshops were run by Liverpool University's Ogden science officer Dr Mark Jones.

First developed by NASA as a possible solution to the problem of moving liquid fuel around spaceships under zero-gravity conditions, ferrofluids are used in the coatings which make stealth bombers invisible to radar and (somewhat closer to everyday life) as a medium for damping in high-quality loudspeakers. The magnetic nanoparticles are magnetite (Fe3O4) and are prepared by carefully adding dilute NH3 solution to an aqueous solution of FeCl2 and FeCl3 in a molar ratio of 1:2. Once the magnetite nanoparticles have been formed, the aqueous supernatant solution is discarded and, after washing with distilled water, an aqueous solution of the surfactant tetramethyl-ammonium hydroxide is added. After careful mixing and removal of excess water, a black ferrofluid is obtained. By placing a magnet near their samples the students could observe the ferrofluid's 'spiking' property, which allows the magnetic lines of force to be visualised in three dimensions.