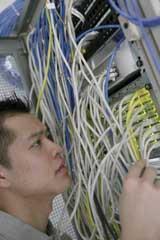 Glowing molecules could light the way to faster data transmission

Alberto Credi of the University of Bologna, Italy, and colleagues have built a simple glowing molecule that can do logical operations of the kind used in encoding the data transmitted down fibre-optic cables for telephone and Internet connections.1 The work could eventually lead to the development of photonic devices that are smaller and faster signal processors and transmitters than those currently used in communications technology. In the short term, molecular logic systems could be used to perform relatively simple computing tasks that, however, cannot be accomplished with silicon-based devices, eg in nanoscale spaces or living things.

The researchers began with 8-methoxy-quinoline, a compound related to the commercially available glowing molecule 8-hydroxyquinoline. They realised that by adding trifluoromethanesulfonic acid (CF3SO3H) to its solution they could readily add a proton to this molecule. This reversible process drastically alters the molecule's absorption spectra. Adding a base, tris-n-butylamine, deprotonates the molecule, switching it back to its original absorption pattern. Proton concentration and the resulting effect on the molecule's spectra can thus act as input and output signals depending on the excitation wavelength of light shining on the solution.

'We have demonstrated that a glowing fluorophore molecule as simple as 8-methoxyquinoline can be used to implement both 2:1 multiplexer (MUX) and 1:2 demultiplexer (DEMUX) functions', says Credi. The MUX and DEMUX functions are important ones in information and communication technology. A multiplexer encodes multiple data streams into a single data line for transmission, and a demultiplexer then decodes such entangled data streams to recover the individual signals at the receiving end. There are very few examples of molecules that can perform as a 2:1 MUX or as a 1:2 DEMUX. These systems usually rely on carefully designed multicomponent molecules and coupling to an external optical device, and they suffer from the problem of being dependent on the state of the input address, which makes them too complex to work with.

To test their logical molecule, the team embedded the 8-methoxyquinoline into a thin film of the polymer polystyrene and recorded its fluorescence spectra upon exposure to acidic and basic reagents using standard spectrofluorimetry techniques. The results suggest that the fluorophore could ultimately be embedded into a practical device which could be connected to a system.

'This work demonstrates that a structurally simple molecule can perform a complex function', says Credi. 'Indeed, the identification of structurally simple but functionally valuable molecules is an important task in nanoscience. Species of this kind can be made cheaply and in large amounts, thereby enabling a wide range of experimental investigations', he said.