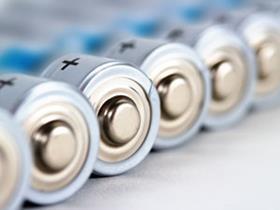 Many devices and toys are sold with a pack of short-life, non-rechargeable, batteries, which ultimately end up in household waste incineration plants if they do not reach a landfill. The quantitative evaluation of emissions from waste incineration is a critical component of complete life-cycle assessment studies of essentially non-recyclable products, such as alkaline batteries.

With this in mind, a team led by Manuel Almeida of the faculty of engineering, at the University of Porto, in Portugal, simulated the waste-incineration process of samples of AA alkaline batteries of the kind used to power everyday gadgets such as motorised toys, small flashlights and telephones.1 Components of such batteries with desirable recyclable materials are: the cathode, which contains manganese dioxide and graphite; the can, comprising a nickel-plated steel cathode collector; an anode containing zinc and zinc oxide; and potassium hydroxide as the electrolyte.

The researchers heated the batteries, which weigh ca 25 g each and are just under 10 per cent moisture by weight, at 1000°C in a steel tube in a horizontal electric furnace for one hour. A continuous flow of air into the tube ensured an adequate oxygen supply for the incineration process. The airflow was also used to guide the gaseous emissions into a filter and collection system. The team analysed the collected emissions using atomic absorption spectroscopy, which revealed the presence of metallic elements, including arsenic, cadmium, cobalt, chromium, copper, iron, mercury, manganese, nickel, lead, antimony, tellurium, and zinc.

The spectroscopic data showed that zinc accounted for the greatest emissions among the metals, perhaps not surprisingly, because it constitutes about 6.5 per cent of the metal content in the batteries. However, though manganese oxide is the main component of the cathode and iron comprises the cathode collector neither of these metals were present in the gas stream above negligible amounts. In contrast, mercury was present even in the second filter, a bubbler flask.

Almeida and his colleagues modelled the incineration process and were able to predict some of the experimental thermodynamic data in the temperature range. 'This analysis was done for most of the potential reactions between components in the batteries as well as between them and the surrounding atmosphere and it reasonably agrees with the experimental results', Almeida says.

There is no cost-effective or simple recycling method for non-rechargeable alkaline batteries and landfill should not be an option because toxic metals can leach into the ground. Understanding the way alkaline batteries burn could, however, be used to improve incineration procedures and manage waste streams more effectively.