Chemists in the US have developed a quick and simple way to find out how old bloodstains are using natural fluorescence measurements. Knowing when blood has been spilled can help forensic scientists pinpoint when a crime took place, but current techniques - such as optical measurements of haemoglobin degradation - can be unreliable.

Now, Mikhail Berezin and colleagues at Washington University in St Louis, US, have developed a technique that relies on the fluorescence lifetime of the tryptophan in blood proteins.

'First, we tried adding dyes [to blood samples] to probe the environment inside the albumin, but that didn't really work,' says Berezin. But then a new type of laser became available, with a wavelength of 295nm. 'It was specifically designed to excite tryptophan,' points out Berezin, and tryptophan's fluorescence is known to be very sensitive to its environment, 'so that's what we tried and it worked'.

'I think it's a great idea and may prove to be a valuable tool for crime scene investigators,' says Clifton Bishop from West Virginia University, US, who has studied blood aging by monitoring decay of RNA in blood samples. However, he raises concerns about the robustness of the technique. 'It worked well when the sample was deposited on a clean, sterile Petri dish,' he says. 'What happens with a sample on an organic surface, such as cloth, or in the presence of bacteria?'

Berezin agrees that it will take a lot more work to determine precisely how such external environmental factors influence the lifetime of the fluorescence signal and turn this into a reliable method to age bloodstains. One way to overcome some of the problems might be to combine readings from several different fluorescent molecules. If that can be done, the technique would have several advantages. It would be independent of concentration, he says, which means only a tiny sample of blood is needed, and the signal changes most in the first week of aging, which makes it complementary to optical methods, which tend to be better at distinguishing longer timescales. 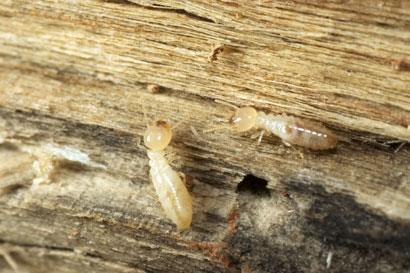 In Australia, termites cause an estimated $2 billion in damage annually

Scientists in Australia have found that mesoporous silica nanoparticles (MSNs) can store and deliver biocides in a controlled fashion over time, which could be beneficial to the timber industry with regards to termites.

Termites pose a significant threat to the industry throughout the tropics and subtropics. The conventional solution to this problem is to use agrichemical biocides such as dichloro-diphenyl-trichloroethane (DDT), aldrin, dieldrin, chlordane and heptachlor. But these compounds cause environmental damage via bioaccumulation, threatening the existence of some species, particularly large predators at the top of the food chain. And attempts to destroy entire termite colonies using them have been unsucessful.

Now, Zhang Qiao and colleagues at the University of Queensland, have used the pore structure of mesoporous silica nanoparticles to adsorb biocides. They found that the nanoparticles released the biocide in a controlled manner. This slow release is important as the termites will feed on and transfer the particles to other termites, eventually leading to colony destruction.

The team chose four different types of MSNs to test, using the agricultural biocide imidacloprid as a model. They found that MCM-48 particles had the highest adsorption capacity. 'We can effectively load the biocide into MSNs and release it over 48 hours,' says Qiao. 'However, it is difficult to control the release because of the biocide's water solubility and fast mass transport.'

Andrea O'Connor, an expert in nano and biomolecular engineering at the University of Melbourne, Australia, agrees that more control over release rates is needed. This would 'minimise the early burst release and extend biocide delivery over biologically relevant time periods and dose rates', she says. However, she adds that the system is simple and delivers the nanoparticles in a suspension into the site of an infestation 'rather than relying on diffusion of released biocide through the environment, where it may be degraded or have undesirable adverse effects.'

Qiao adds that to effectively deliver the biocide over a period of about seven days, the MSNs need to be coated with other chemicals. The team is investigating a biodegradable polymer coating.

Chinese scientists have taken a step towards further understanding the reactions that led to the origin of life by showing that a crucial metabolic process can be photocatalysed on the surface of a common mineral.

The citric acid or tricarboxylic acid cycle is central to almost all life and is used to generate energy from the conversion of acetate from fats, proteins and carbohydrates to carbon dioxide and water. Some bacteria run this cycle in reverse in a reductive tricarboxylic acid cycle (rTCA), making carbon compounds from carbon dioxide and water, and this has been suggested to be the central part of primordial metabolism. 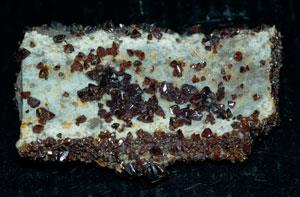 Wei Wang from Harbin Institute of Technology and colleagues claim that early reactions to form biological molecules and metabolic pathways could have occurred on the surface of sulfide minerals in under-sea hydrothermal vents. This could explain why enzymes containing transition metal-sulfide clusters play a vital role in the metabolism of most organisms.

Wang's team used the mineral sphalerite (ZnS) to photocatalyse the reversible reductive amination of alpha-keto acids, which could balance the entry and exit of metabolites from the rTCA (a process known as homeostasis). 'Previous studies have mainly focused on the fixation of gas molecules, the reduction of metabolic intermediates and the extension of molecular chains. Up to now, little attention has been paid to archaic redox homeostasis,' says Wang.

Their experiments showed that under UV irradiation, sphalerite could catalyse both the reductive amination of alpha-ketoglutarate (an intermediate in the rTCA) to the amino acid glutamate and the reverse reaction. The system could also catalyse three other reversible amination processes needed for homeostasis - the conversions of amino acids alanine, glycine and aspartate from, and to, rTCA metabolites. These results not only suggest a new pathway for the formation of amino acids, but they also suggest an early way of regulating primeval metabolism.

Marcelo Guzman, an expert in prebiotic metabolism from the University of Kentucky, US praises the work. 'The work addresses a fundamental problem for the emergence of biochemistry from geochemistry on Earth,' he says, but he does suggest that further investigations are needed. 'Given the relatively low yields reported (that are, however, much higher than those obtained by other processes), what is the minimum yield for an individual reaction that would allow the metabolic pathways to keep operating?' he asks.

Wang's team plans to continue investigating early homeostasis by developing transition metal doped ZnS that can photocatalyse these fundamental reactions using only visible light, which made up the majority of the primordial solar spectrum.

You injure yourself and inevitably it hurts. But instead of heading to the medicine cabinet you're already starting to feel better, as your sense-act-treat patch kicks in and releases a pain killer. That's a scenario that Joseph Wang and colleagues at the University of California-San Diego, US, are trying to turn into a reality.

In collaboration with Evgeny Katz at Clarkson University, US, the team have wired up a biofuel cell that is activated by injury biomarkers and then releases a drug from one of the electrodes. The integrated system uses Boolean logic to regulate the release of the drug and only delivers as much of the drug as is needed. Both logically responsive fuel cells and logically controlled drug release have been achieved before, but this is the first time that the two have been combined. 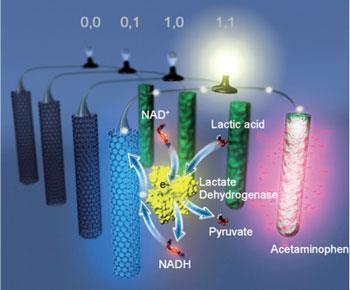 The team decided to produce a biofuel device that responded to lactic acid, as excess amounts of this molecule are released in the event of abdominal trauma. They created a system consisting of a biofuel cell that has an enzyme based logic gate on its anode and a drug containing cathode. When both lactic acid and lactate dehydrogenase (LDH) are present, LDH catalyses the production of pyruvate from lactic acid, using NAD+ as an oxidising agent. The NADH that is subsequently formed by the reaction can then feed electrons into the fuel cell. In this way, LDH and lactic acid act as an AND gate, and the drug at the cathode - in this case paracetamol - is only released when the injury biomarker lactic acid is detected and the circuit is completed.

The work was funded by the Office of Naval Research and Wang explains that the goal is to design a complete 'nanopharmacy' that can monitor and treat soldiers on the battlefield, perhaps as a patch on the arm.

'The field of molecular logic is growing nicely now with good applications beginning to emerge,' says A P de Silva, who works on molecular logic at Queen's University, Belfast, UK. 'Joe Wang's paper is one of these.'

There's still a long way to go for practical use as various improvements are made, but maybe one day the medicine cabinet itself will be a thing of the past.