An experiment by a team of Russian, Polish and Swiss scientists shows that element 112 is chemically more akin to its Group 12 relative mercury than any noble gas element 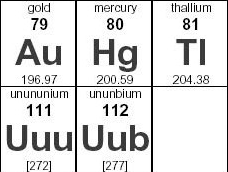 Contrary to some expectations, element 112 is chemically more akin to its Group 12 relative mercury than any noble gas element, according to the results of an experiment by a team of Russian, Polish and Swiss scientists which involved just two atoms of the superheavy element.

Element 112 (unofficially named ununbium) was first synthesised in 1996 at the Heavy Ion Research Laboratory in Darmstadt, Germany by a group led by physicist Sigurd Hofmann. Its 283112 isotope has a half-life of a few seconds, making chemical study feasible. Although element 112 is placed below mercury in Group 12 of the Periodic Table, some theoretical calculations - based on the stabilising effects of the high nuclear charge of the nucleus on the element's electronic structure - predicted it might resemble a noble gas such as radon.

In an experiment done at the Flerov Laboratory of the Joint Institute for Nuclear Research in Dubna, Russia, the team of scientists, headed by chemist Robert Eichler of the Paul Scherrer Institute in Switzerland, spent several days bombarding a target of 242Pu with the neutron-rich isotope 48Ca, a route to an isotope of element 114, 287114. These nuclei decay via α-particle emission in ca 0.5s to 283112, a process which occurred only twice during the experiment. The two 283112 atoms, along with mercury and radon nuclei, were carried by a stream of helium to gold-covered silicon detectors, the temperature of which ranged from +30 to -180oC. Here the decay chains of the 283112 atoms were detected and the energy of adsorption, given by the temperature at which the atom formed a chemical bond with the gold surface, measured and compared with that of mercury and radon.

Reporting their results in the journal Nature in May, the researchers showed that the atoms of element 112 are strongly adsorbed, very much in keeping with mercury-like behaviour. This suggests that the volatile element 112 has the ability to form metal-gold bonds.

Nuclear fusion experiments have yielded elements with atomic numbers as high as 118, and scientists are trying to see how these short-lived atoms behave. Other experiments in recent years have suggested that elements 106-108 (seaborgium, bohrium and hassium respectively) are members of a 6d transition series; Hs forms a volatile oxide thought to be akin to OsO4, for example.

We already have one metal that is a liquid at 298 K, as well as one or two near misses (eg gallium and caesium). It remains to be seen whether ununbium exhibits mercury's liquid properties at room temperature or if it is the first room-temperature gaseous metal.