In 1999, scientists at the American Lawrence Berkeley National Laboratory reported the synthesis of element 118... 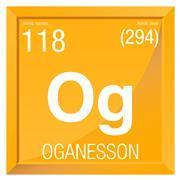 In 1999, scientists at the American Lawrence Berkeley National Laboratory reported the synthesis of element 118 by bombarding 20882Pb with a beam of 8636Kr nuclei. These claims were retracted in 2001 - it seems that one member of the team fabricated the results.

Now collaboration between Russian and American scientists may have delivered the goods. Using a particle accelerator at the Flerov Laboratory of Nuclear Reactions at Dubna in Russia, physicists from the Joint Institute for Nuclear Research in Russia and the Lawrence Livermore National Laboratory in the US bombarded a target of 24998Cf with an intense beam of atoms of the neutron rich 4820Ca isotope.

They only made three atoms of the very short-lived Ununoctium (Uuo, element 118) and to achieve this they had to fire ca 1019 calcium ions at the target. The atoms of element 118 have a lifetime of around a millisecond, decaying successively to atoms of elements 116, 114 and 112; the last of these then undergoes spontaneous fission.

Part of the evidence for the formation of element 118 involved independent synthesis of 290 116Uuh.

So what is the significance of the news? The new element cannot be given a name until independent synthesis has been achieved - the reported elements 112-116 are in the same situation.

Element 118 sits below radon in the Periodic Table, so it should be a 'noble gas' (possibly a liquid at room temperature) though chemical experiments are out of the question with so little of the isotope synthesised.

For many years scientists have thought that elements in this region could have the right number of protons to form an 'island of stability' leading to longer half-lives. However, it remains to be seen whether there is anything in this. Next year, the Russian-US team plan to have a go at making element 120, by bombarding 94Pu with 26Fe.