Extra cash for chemistry in the short term

The Higher Education Funding Council for England (HEFCE) has awarded an additional £1.65m to the Chemistry for our future (CFOF) programme

In April the Higher Education Funding Council for England (HEFCE) awarded an additional £1.65m to the Chemistry for our future (CFOF) programme. The additional funds will extend the initiative from September 2008 to July 2009. The programme's national manager, Melanie Washington, told Education in Chemistry, 'The extension phase will provide opportunities for the projects to become established, the dissemination of project outcomes and best practice among partner HEIs, and for further evaluation of the initiative'.

By funding CFOF to July 2009, HEFCE will align the timetables of its four profile-raising actives in science, technology, engineering and mathematics (STEM) subjects. 'During the next 10 months we will work with the other HEFCE-funded STEM initiatives to develop a united bid for funding to continue our work from 2009 and beyond as part of a collaborative STEM programme', adds Washington. 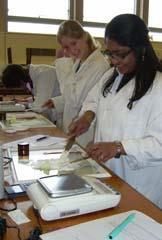 Source: RSC/Chemistry for our Future

Launched in 2006 with £3.6 million from HEFCE for an initial two-year pilot phase, the Royal Society of Chemistry-managed (RSC) CFOF programme aims to increase student demand for HE chemical sciences and develop diversity of provision at this level for students through projects addressing four strands:

Later this year CFOF will publish its report on the implications of the Bologna Process for HE chemical sciences, Mastering Bologna, while three new teachers will start one-year secondments as full-time school teacher fellows at University College London and at the Universities of Newcastle and Northumbria.

Informed by an interim report on an evaluation of the project undertaken by the National Foundation for Education Research (NFER), the successful bid outlines that all but two of the programme's existing projects will continue to run in the extension phase.

The extra funding will not support any expansion of the project over the next year, which means roll out to the final three regions in England of the programme's successful Aimhigher outreach initiative - Chemistry the next generation - will be put on hold for now.

The CFOF bid for extra funding sets out the additional aim to produce, by August 2009, a collaborative STEM bid for schools, colleges, HEIs and industry by working more closely with the three other HEFCE-funded STEM initiatives, ie the Royal Academy of Engineering-managed London engineering project, the Institute of Physics' Stimulating physics, and Moremathsgrads run by the Higher Education Academy Maths, Stats and OR Network. As yet, HEFCE has not indicated what funding will be on offer to this collaborative initiative, which will run alongside the Government's STEM Programme led by Professor John Holman. But in light of the Government's response to the Leitch report, Prosperity for all in the global economy - world class skills, and its recent focus on providing skills for a competitive UK work force, this new combined approach might be vital to ensure that the valuable work of CFOF to widen participation in the chemical sciences in HE continues.

For further information on the CFOF programme contact Melanie Washington, national manager Chemistry for our future, at the RSC.