Should flaxseed oil be added to the diet of women at risk of developing osteoporosis? 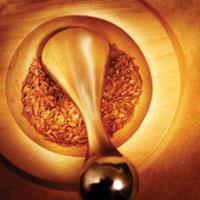 Flaxseed oil could be added to the diet of women at risk of osteoporosis to reduce the incidence of this potentially debilitating disease, according to researchers in Egypt. Osteoporosis is characterised by reduced bone strength and loss of bone density.

Flaxseeds, from the blue flowering plant Linum usitatissimum, produce flaxseed oil (linseed oil), which contains Ω-3 fatty acids. These compounds could have a role to play in the bone mineralisation and the formation of the mineral-protein matrix, which are often compromised in diabetes and menopause, leading to increased risk of fractures.

Mer Harvi and colleagues at the National Research Center, in Cairo, have investigated the effect of diabetes on bone health and evaluated how adding flaxseed oil to the diet might improve it. The team looked at 70 female lab rats of which 30 had no ovaries (ovx), a state that mimics the hormone changes seen in the menopause in women. Others had diabetes. They classified the rats as control, diabetic, diabetic with flaxseed oil in the diet, ovx, ovx-diabetic and ovx-diabetic with flaxseed oil in the diet.

The team fed the rats an appropriate diet for their group for two months and then collected urine and blood samples from the rats and measured levels of insulin-like growth factor 1 (IGF-1) in their serum and the concentration of the bone-making protein osteocalcin. They found that these two compounds were present at higher levels in the ovx and the diabetic-ovx groups, but much lower in the non-ovx diabetic group. The concentrations of IGF-1 and osteocalcin were normal if flaxseed oil was in the diet.

The team also discovered that the urine concentrations of another compound found in healthy bone, deoxypyridinoline, were higher in the diabetic group. Deoxypyridinoline acts as a marker for bone resorption associated with osteoporosis. Again, the level of this marker compound was lower in lab rats given flaxseed oil in their diet.

The team concludes that having diabetes has a more pronounced effect on the rats' bone health than having no ovaries. This may suggest that diabetes in post-menopausal women may be a bigger risk factor for them developing osteoporosis than the lack of sex hormones associated with the menopause.

The team says that the addition of flaxseed oil to the diet could offset this risk because it improves bone mineral density and reduces the chemical markers associated with osteoporosis. Further studies are needed to confirm the results.