From coffee shop to biodiesel source in one step

Spent coffee grounds have been turned into biodiesel by researchers from Portugal and Spain, who combined two separate processes to produce the biodiesel in one step 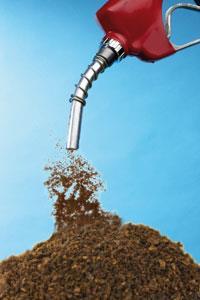 The process combines extraction and transesterification in one step

Spent coffee grounds contain up to 20 weight per cent lipids, most of which are triglycerides that can be extracted and converted by transesterification into the fatty acid methyl esters that make up biodiesel. Pedro Simões from the New University of Lisbon and colleagues produced the esters in a 93 per cent yield, combining the extraction and transesterification processes in one step.

Current commercial biodiesel production consists of an alkali-catalysed method to produce a mixture of fatty acid alkyl esters and glycerol. But several purification processes are needed to remove the catalyst and by-products. Reactions in supercritical methanol without a catalyst have also been used - vegetable oils are more soluble in supercritical methanol than in normal methanol, leading to greater yields - but scientists need expensive equipment to produce the high temperatures and pressures required.

Simões' team performed the reaction in supercritical methanol at 603 K and 30 MPa to obtain a fatty acid methyl ester in a yield of 85 per cent. To increase the yield further they had to increase the temperature and pressure. But then they found that adding carbon dioxide to the mixture gave a higher yield - 93 per cent - at a reduced temperature of 573 K and pressure of 10 MPa.

The researchers explain that CO2 may play a dual role in the reaction by increasing the extraction rate of oil from the spent coffee grounds and recovering the methyl esters from the reaction mixture.

This work should pave the way for developing methods for new ways of processing waste food rather than composting and anaerobic digestion, says Rafael Luque, an expert on biofuels from the University of Cordoba, Spain. He adds that 'there is a need to change the perception of waste as a problem - it should be perceived as a resource to produce valuable chemicals and biofuels.'