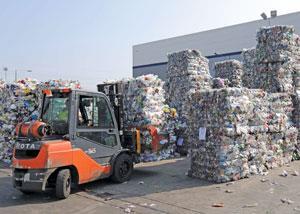 Soil fungi and a strain of fungus that causes white rot could be useful agents in the biodegradation of bisphenol A based plastics, one of the most controversial of modern chemicals.

Bisphenol A is the monomer used in the manufacture of several polymer-based products - not least bisphenol A polycarbonate and various epoxy resins - and is also a common plasticizer for other polymers.

2.7 million tonnes of PBA based plastics are produced every year for use in construction materials, tool handles, toys, plastic drinks bottles, baby-milk bottles, optical disks (CDs and DVDs) and even the lenses in a pair of "glasses" and there is now a considerable amount of BPA-containing polymer material in refuse, ripe for recycling.

However, suspicions about the environmental safety and health risks associated with BPA's estrogenic properties have been known since the 1930s. In recent years BPA has moved up the environmentalist agenda as possible problems associated with the widespread use of this compound come to light. Indeed, a 2010 report from the United States Food and Drug Administration (FDA) raised concerns regarding the exposure of young children and the unborn foetus to BPA and called for more research to determine absolute hazards.

Mukesh Doble and Trishul Artham of the Department of Biotechnology at the Indian Institute of Technology Madras, Chennai, India, have looked at the enhanced degradation of polycarbonate and specifically whether or not BPA is leached from the process. There are several pre-treatment strategies for BPA polymers, including photochemical and thermal treatments. These work by generating highly reactive free radicals that rapidly oxidize the polymer molecules, breaking the polymer chains.

The Chennai based team hoped that various fungi might prove an additional way of degrading BPA polymers after ultraviolet light or heat treatment and they tested the well-known white-rot fungus Phanerochaete chrysosporium NCIM 1170 (SF2) - used commercially for the bioremediation of other pollutants - and two other fungal strains based on Engyodontium album MTP091 (SF1) and Pencillium spp. MTP093 (SF3).

The researchers found that the fungi grew well on pre-treated plastic and could metabolise BPA as a carbon "food" source after partial degradation by UV or heat, but the fungi could not break down the plastics without the initial physical pre-treatment.

Importantly, the team found no trace of raw bisphenol A monomer at any stage in the study, which bodes well for the use of this combined biological and physical approach to disposing of BPA polymer waste.