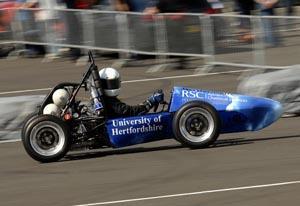 The world's first hydrogen-powered Formula Student racing car will be one of the attractions of this year's Chemistry Week national tour, which the Royal Society of Chemistry (RSC) will be running from 3-11 November. Sponsored by the RSC, the racing car has been designed and built by students in the University of Hertfordshire's Sustainable Energy Technology Centre at Hatfield. Fuelled by hydrogen produced from farm waste, the car can accelerate from 0-60 in 3.2 s and reach speeds of 130 mph. The car made its debut at the Formula Student race weekend held at Silverstone in July and organised by the Institution of Mechanical Engineers.

Under the RSC's campaign banner Fuelling the future, the Chemistry Week national tour will be visiting nine locations across the UK to promote to the public the contribution chemistry and the chemical sciences can make to reducing carbon emissions through alternative fuel technology. Starting at the Glasgow Science Centre on 3 November the tour will make seven other stops across England and Wales before concluding in London. Other vehicles, powered by alternative fuels, will also be on show.

Schools and colleges who want to run activities linked to Chemistry Week's Fuelling the future theme will find links to related RSC resources at the Chemistry Week webpage. For information on Chemistry Week events in your area and on the national tour contact Leanne Marle at the RSC.