MAVEN mission gets the go-ahead 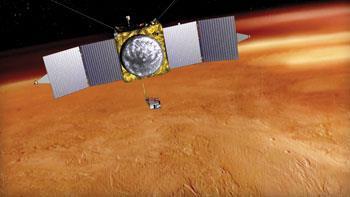 On 4 October, NASA announced a new mission to Mars. Mission MAVEN (Mars Atmosphere and Volatile EvolutioN) will investigate what happened to Mars' atmosphere and how habitable the red planet might be. The mission will launch in late 2013.

The Principal Investigator for MAVEN is Dr. Bruce Jakosky of the University of Colorado Laboratory for Atmospheric and Space Physics. Launching the mission Dr Jakosky said that water, and perhaps life, was on Mars at some point in the past. There is also evidence that the Martian atmosphere has been lost to space. "A better understanding of the upper atmosphere and the role that escape to space has played is required to plug a major hole in our understanding of Mars. We're really excited about having the opportunity to address these fundamental science questions."

Using a mass spectrometer and a magnetometer MAVEN will obtain detailed measurements of Mars' upper atmosphere, ionosphere, planetary corona, and solar wind. MAVEN will determine how much Martian atmosphere has been lost over time by measuring the isotope ratios of hydrogen and deuterium and other elements in the atmosphere, such as nitrogen, oxygen, and carbon. These measurements will help us understand the histories of Mars' climate, liquid water, and planetary habitability.