The department of chemistry at Imperial College, London has been awarded a pair of RSC National Chemical Landmarks in recognition of the work of two of its Nobel prizewinning alumni chemists, professors Sir Derek Barton and Sir Geoffrey Wilkinson. The awards are part of an RSC initiative to commemorate major achievements in the chemical sciences and bring them to the attention of the public.

Two blue plaques were presented to the rector of Imperial College, Sir Richard Sykes, by the RSC president Professor Jim Feast, at a ceremony in the Sir Alexander Fleming Building in May. The timely awards come as the South Kensington-based institution celebrates the centenary of the signing of its founding charter on 8 July 1907, which combined three 19th century institutions - the Royal School of Mines, the Royal College of Science and the City and Guilds College.

Barton (1918-98), from Gravesend in Kent, and the Yorkshire-born Wilkinson (1921-96) both studied chemistry at Imperial College, Barton graduating top of his class in 1940, Wilkinson graduated a year later. After completing PhDs at Imperial College the two budding chemists were drawn into war-related research. Barton stayed in South Kensington to do military intelligence research, which included developing invisible inks. Meanwhile Wilkinson set sail for Canada to work on the atomic bomb project at Chalk River, Ontario.

After World War II Wilkinson moved to Lawrence Livermore Laboratory at Berkeley to continue his radiochemical research, working with Glenn Seaborg. However, in 1951 he opted out of radiochemistry by taking an associate professorship in Harvard University's chemistry department to work on coordination and transition metal chemistry. Here Wilkinson met organic chemist Robert Burns Woodward. Together they solved the puzzle of the structure and chemical bonding of the organometallic molecule ferrocene, Fe(C5H5)2. They put forward the now familiar sandwich-like structure, in which the iron atom sits between two flat cyclopentadiene rings and the bonding between the components is delocalised - a new concept to inorganic chemistry at the time.

Barton also spent time at Harvard, a year in 1950, where he was inspired by eminent US chemists such as Woodward, Gilbert Stork and Louis Fieser. That year Barton deduced that some properties of certain organic molecules depend on their particular shape (or conformation) resulting from rotations about single carbon-carbon bonds. This theory had a huge impact on organic chemistry, launching a new field of research - conformational analysis - in which chemists started to explain the reactivities of compounds by considering the three dimensional shape of molecules. Now a fundamental concept taught in first-year undergraduate organic chemistry courses,

Barton shared the 1969 Nobel prize in chemistry with Odd Hassel, who had studied the structures of six-membered carbon rings, 'for their contributions to the development of the concept of conformation and its application in chemistry'. 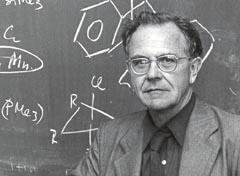 Students return to take up chairs

Following his ferrocene success Wilkinson threw himself into research to make similar new metallocene molecules using different transition and lanthanide elements and different sized rings, work which he continued on his return to Imperial College in 1955 as chair of inorganic chemistry aged 34. Remaining at the department to become head of chemistry in 1976, Wilkinson's organometallic chemistry research led to several applications of coordination complexes to organic synthesis, eg the rhodium complex RhCl[P(C6H5)3]3 (also known as Wilkinson's catalyst) for the homogenous catalytic hydrogenation of C=C bonds.1,2 It was for his work on ferrocene and the metallocenes that Wilkinson shared the 1973 Nobel prize in chemistry with Ernst Otto Fischer of Munich, 'for their pioneering work, performed independently, on the chemistry of the organometallic, so called sandwich compounds'.

Meanwhile, during positions at Birkbeck and Glasgow Universities in the early
1950s, Barton applied conformational analysis to resolve the structures of natural products, such as steroids, continuing this work on his return to Imperial College as professor of organic chemistry in 1956. In the following 21 years at Imperial College, during which time he became Hofmann professor of organic chemistry in 1970, Barton's collaborative research focused on natural products, photochemistry and biosynthesis.

Barton's name is associated with several new reactions developed during this period including the Barton nitrite photolysis reaction and the Barton-McCombie deoxygenation reaction. Not wanting to retire from research Barton later took up positions at the CNRS in Paris and Texas A&M University in the US.