Stephen Ashworth is on tour in South Africa to raise the public awareness of chemistry and physics, and to encourage children to pursue careers in science 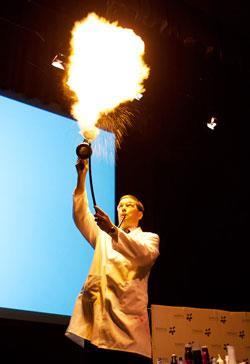 Stephen Ashworth from the University of East Anglia (UEA) is on tour in South Africa to raise the public awareness and understanding of chemistry and physics, and to encourage children to pursue careers in science.

As part of Scifest Africa, a national science festival, the Kitchen Chemistry outreach tour will see Stephen presenting science shows and educator workshops that use inexpensive consumables and accessible equipment to teach topics in the physical sciences curriculum. The tour, sponsored by the RSC and presented in collaboration with the UEA and Scifest Africa, will travel to all nine South African provinces between January and April.

Anja Fourie, Scifest Africa director, says the demand to promote science and mathematics among learners and educators who cannot afford to visit the festival, has seen the event grow to include national outreach projects such as the Kitchen Chemistry tour. 'This growing demand means we constantly need to develop quality interactive educational programmes and resources, and we welcome the opportunity to work with experienced science communicators such as Stephen.'

Stephen, who has worked and toured extensively in South Africa since 2008, takes with him 14 years' experience as a science communicator. It was his passion for science, teaching and outreach that led to his decision to take a three month sabbatical to support learners and educators in South Africa that do not have access to laboratories or chemicals. 'I want learners to see that science is truly all around us, excite them about science outside the classroom in a manner that is accessible, interactive and fun, and show them that anyone can be a scientists, no matter who you are and where you come from', said Stephen.

The Kitchen Chemistry tour will culminate with science shows at the 2013 festival to be held in Grahamstown, Eastern Cape from 13-19 March. Scifest Africa is attended by 72 000 visitors from around Southern Africa and offers a quality programme featuring more than 500 interactive events, including lectures, demonstrations, exhibitions and workshops.