In November the Science Museum in London will reopen its hands-on science gallery, Launchpad 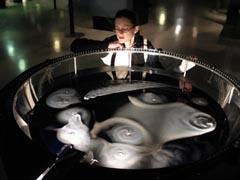 Carbon dioxide changes from solid to gas before your eyes

In November the Science Museum in London will reopen its hands-on science gallery, Launchpad, following a £4 million make-over. With support from Shell, Nintendo, the Garfield Weston Foundation and the Zochonis Charitable Trust, Launchpad will relocate from the basement of the Science Museum to its third floor. The revamped gallery will feature 50-plus interactive science exhibits, housed in a bigger space (1200m2) and with more natural light and ventilation.

Organised into six sections with the themes light, sound, materials, energy transfer, forces and motion, and electricity and magnetism, the design of the new suite has been informed by consultations with students, parents, teachers and science educationalists. The exhibits, which include newly commissioned works and re-invented Launchpad 'classics' such as Big machine, are designed to encourage 8-14-year olds to explore and question science and technology, and support the teaching of science at Key Stages 2-3.

The Science Museum has also developed a website which allows users to explore the gallery content online. Starting in January 2008 a Launchpad-themed outreach programme for schools will run through hubs in the North West and South East of England and North East Scotland.

The centre will open on Saturday 24 November and admission is free. Readers can be the first to see the new exhibits and resources at a teacher preview evening to be held on Tuesday 20 November. To apply for tickets contact the Science Museum box office (Tel: 020-7942 4777).