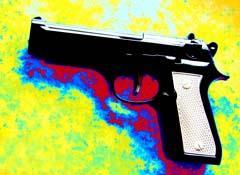 Environmental and health concerns surrounding the use of lead mean that now most gun ammunition is made lead free. Because of this development, police forensic scientists cannot rely solely on standard tests for lead in gun crime scene investigations. Now, US chemists Jorn Chi Chung Yu, Garrett Lee Burleson, and colleagues in the department of forensic science at Sam Houston State University in Texas have devised an approach to sampling and analysing gunshot residues that circumvents the problem of a lack of lead and could complement conventional forensic techniques.

'When a gun fires, the gunpowder explodes, producing gases at enormous pressure that propels the bullet out of the barrel of the firearm,' explains Burleson. 'Some of the residue from that explosion is deposited on the hands of the shooter and the clothing of the victim'. The new analytical method identifies the chemicals present in this ejected material.

The technique, presented at the American Chemical Society annual meeting in April, requires just a tiny speck of gunpowder residue and can give results in 30 to 40 minutes. The method uses solid-phase micro-extraction to remove the chemical components from the residue without the need for reagents. The extracts are then separated and identified using gas chromatography coupled with a nitrogen-phosphorous detector.

According to Burleson, 'Gunshot residue tests are done in almost every case where a shooting has taken place. The main focus of our research was to develop a method that would enhance the credibility of gunshot residue evidence in court'. However, as Burleson points out, most of the current forensic methods for analysing gunshot residues, are susceptible to outside interferences that can lead to false positives or false negatives. For example, the modified Griess test is based on the detection of nitrites, which are gunpowder byproducts, but these chemicals are also found in cleaning products designed to remove motor oil. Moreover, it is the presence of lead that is essential to a valid reading for many of the standard tests, eg the sodium rhodizonate test and scanning electron microscopy with energy dispersive x-ray detection.

Burleson explains, 'When you have a residue particle, no matter how small, it will contain signatures of every element in that powder, and these signatures offer a wider range of detection possibilities'. For example, a combination of certain chemicals, such as diphenylamine, ethyl centralite (symmetrical diethyl diphenyl urea) and nitrodiphenylamine, is typically found only in explosive mixtures and therefore allows for a simple analysis of the use of guns at a crime scene.

The researchers believe their method has the potential to identify explosives, plasticisers, and trace amounts of additives from gunshot residue for forensic applications. However, Burleson concedes that the technique will not replace the current tests. Instead, scientists might use his method to confirm their results and perhaps provide a definitive answer in the event that a false positive or negative result occurs in the absence of a lead residue.