Let there be light

For the past 28 years experiments using the bright light generated by the Synchrotron Radiation Source (SRS) at the Daresbury Laboratory have supported the development of new medicines, electronic gadgets, and even chocolate 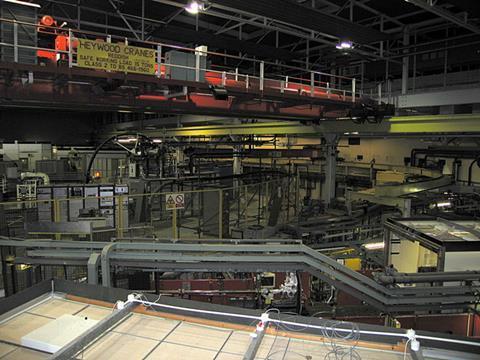 For the past 28 years experiments using the bright light generated by the Synchrotron Radiation Source (SRS) at the Daresbury Laboratory, Cheshire, have supported the development of new medicines, electronic gadgets like iPods, and even chocolate. In August 2008 the light at the SRS was switched off, shifting the focus for similar experiments to the new Diamond Light Source in Oxfordshire.

ynchrotron radiation (SR) is the intense electromagnetic radiation, ie light, emitted by charged particles travelling close to the speed of light (ca 3 × 108 m s-1) around a circular particle accelerator - a synchrotron. First observed in 1947 by General Electric scientists who were developing particle accelerators for atom-smashing experiments, the emission was seen as a 'waste product' because it is energy lost from the accelerated particles. But by the 1960s scientists, notably Professor Ian Munro at the Daresbury Laboratory, had realised that this unique light had experimental applications.

In a synchrotron, like the SRS, electrons are generated by heating a cathode and then fired by a linear particle accelerator (linac) as a beam into a vacuum booster ring, where the energy of the beam is increased. When the electrons approach the speed of light, the beam is fed into a larger vacuum storage ring. Positioned around the ring are accelerator devices to maintain the speed of the circulating electrons and sets of powerful magnets that bend and focus the beam of particles. To control the electron beam the frequency of the accelerating field and power of the controlling magnets are synchronised, hence the name synchrotron. As the electron beam circulates it emits SR and at points around the storage ring this light enters a beamline - an experiment station consisting of optics, experimental and control setups where scientists do their studies.

The SR generated is extremely intense (104 -106 times brighter than that from conventional x-ray tubes), polarised light across a range of wavelengths from x-rays, through uv-visible to infrared. The light is tunable, allowing scientists to select a particular wavelength, and is produced in nanosecond (10-9 s) pulses, which allow the study of very fast processes. These unique properties of SR light are put to use in four main types of studies: 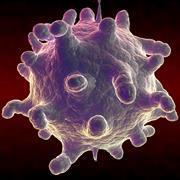 When it opened in 1980, the SRS was the world's first dedicated SR light source. Scientists used the SRS and its unique light as an ultra-powerful microscope to view atoms and molecules and probe the structure of materials.

Professor John Helliwell of the school of chemistry at the University of Manchester told Education in chemistry, 'Some 3000 protein structures have been identified through experiments at the SRS and this three dimensional structural knowledge has helped guide drug discovery'. For example in the 1980s, Michael Rossmann of Purdue University brought to the SRS a crystal sample of human rhinovirus-14, the cause of the common the cold. Based on data collected by X-ray crystallography, Rossmann mapped the virus' three dimensional structure to the atomic level, showing it to be spherical with grooves and pits on the surface. Similar work at the SRS led by Professor David Stuart of Oxford University revealed that the foot and mouth disease virus (FMDV) has a smoother, spherical shape. 'Seeing the pitted shape of the rhinovirus allowed chemists to design drug molecules to lock into the grooves, clamping shut the virus and thus stopping replication', explains Helliwell, 'but the FMDV, with its smooth surface, doesn't permit the same approach. This is why we have no effective drug treatment for foot and mouth disease'.

The applications of SR do not just lie in the fields of biology, chemistry and medicine. It is an important tool in material science too, driving developments in computers, aerospace engineering and the food industry.

Material scientists make use of the polarised nature of synchrotron light. The polarisation can be linear, circular or elliptical. Circularly polarised light is either left-handed or right-handed depending on the orientation of its electric field. 'Materials absorb one type of circularly polarised light in preference to the other', explains Professor Bob Cernik of the University of Manchester. 'This preference is determined by the magnetic properties of the material. We exploit this relationship in X-ray magnetic circular dichroism studies, which can allow us to detect specific elements and their magnetic properties on a surface'. Such studies have led to advances in hard disk technology and magnetic storage devices such as iPods.

Synchrotron studies have even given us smoother chocolate. Cocoa butter, a key ingredient in chocolate, solidifies on cooling into several different crystalline structures, each of which has distinct properties that can enhance or spoil chocolate. One crystalline structure in particular, polymorph V, makes the best chocolate because it melts just below body temperature (37°C), giving the desired 'melt-in-the mouth' sensation. However, polymorph V is difficult to make and converts into other crystalline forms. To investigate how the polymorph V content in chocolate could be increased researchers from Heriot-Watt University developed a small-scale reaction chamber designed to imitate the manufacture of chocolate. With this device set up in a beamline at the SRS they monitored the formation of crystalline structures in the cocoa butter mix while under different processing conditions (heating, cooling, stirring etc) in real-time using X-ray scattering analysis. The study showed that stirring is critical for the formation of polymorph V and using the results chocolate manufacturers developed new production techniques to achieve chocolate nirvana.

The Diamond Light Source in south Oxfordshire opened in January 2007 and is the largest science facility to be built in the UK for 40 years. This third-generation synchrotron can produce light that is 10 million times brighter than the Sun. Currently Diamond hosts 12 beamlines, which will increase to 22 by 2012. According to Dr Nick Terrill, one of Diamond's principal beamline scientists, 'the extreme intensity of Diamond's light allows scientists to see fine detail on the atomic scale even when studying very dilute samples'.

Environmental scientists are among the many researchers to benefit from this brilliant new light source. Dr Mark Hodson of the University of Reading is investigating whether earthworms might have a role to play in the remediation of metal-contaminated sites. Earthworms are important to maintain healthy soil. They help degrade organic matter, mix and aerate soils, and boost soil stability and fertility. In soil contaminated with metals, eg near mines, industrial sites, scientists have found super-metal munching earthworms that have evolved mechanisms which allow them to tolerate toxic elements such as cooper, arsenic and lead. Using X-ray absorption spectroscopy, Hodson is investigating how these earthworms cope with the toxic metals in their tissue, and the distribution of the metals in worm excrement. 'The size of the metal samples we are tracking is around one thousand times smaller than a grain of salt', says Hodson. 'But using Diamond's light we can map zinc concentration in earthworm tissue, pinpoint metal sites and find out about how the metal is coordinated'.

Despite the power of current SR light source facilities scientists are still in the dark when it comes to studying events that occur on the sub-picosecond (10-12 s) timescale, eg the function of single biomolecules in living systems and membrane transport, and measuring electronic dynamics. But a worldwide effort is under way to design and build the next generation of SR light sources. UK scientists are working on the New Light Source project and ALICE, a fourth-generation prototype accelerator under development at Daresbury which will generate even brighter light and in pulses thousands of time shorter than what is currently achievable. So the future for scientific research looks even brighter.

Acknowledgements: This article is based on two seminars run at the BA Festival of Science held at the University of Liverpool in September 2008.