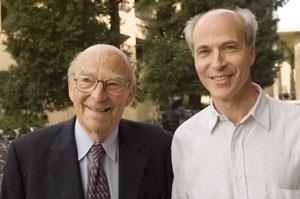 Roger Kornberg's research is about how genetic information bound inside a cell nucleus as DNA, in organisms as diverse as the yeast, dogs, and frogs, fish and fowl and humans, is used to make the very stuff of life, proteins. The key to this process involves 'unzipping' the DNA to make the messenger molecule, mRNA, in a process called transcription. The resulting mRNA carries with it the template for making all the proteins an organism needs to live, breathe, feed and reproduce.

The key to success

Transcription is an essential biochemical process, first described in detail in the 1950s by Samuel Weiss and Leonard Gladstone. It is controlled by a complex system of enzymes and other molecules, which makes it difficult to discern precisely what happens in the cell during the process. As such, early studies of transcription focused on bacterial, or prokaryotic cells, in which the cell nucleus has no membrane. Cells such as our own and those of yeasts, mammals, fish, and birds, do have a membrane surrounding the nucleus and carry DNA tightly wound up in a protein structure (the nucleosome).

The key to Kornberg's success was to use electron microscopy and X-ray crystallography to an obtain atom-by-atom image of the primary enzyme involved in transcription, RNA polymerase. This helped him to understand what happens in the cell between locked up DNA and protein production.

To complicate matters, unlike bacteria, eukaryotic cells contain three different forms of RNA polymerase (I, II, and III), which were first discovered in the late 1960s. It turned out that all the fragments of DNA (genes) needed to make proteins are transcribed by RNA polymerase II. However, insights into transcription were few and far between because the scientists discovered to their dismay that RNA polymerase from eukaryotic cells, in stark contrast to the bacterial enzyme, did not work in isolation but required the full cell machinery to operate properly.

By 1979, Anthony Weil and colleagues had constructed a human tissue culture cell extract, a kind of cellular model, in the laboratory that would work with purified RNA polymerase II. This model revealed that, as many scientists suspected, the system relied on additional chemicals, transcription factors, to work. These transcription factors - TFIIB, D, E, F, and H - were identified one by one by various researchers. Each factor plays a role in: recognising the start site on a gene; helping separate the strands of the DNA template; making a copy of one strand into RNA using ribonucleoside triphosphates as the building blocks; and re-uniting the two unzipped DNA strands while it moves to the next gene along the double helix.

Roger Kornberg entered the field when he was a post-doctoral student in the Laboratory of Molecular Biology at the University of Cambridge, UK, working with DNA pioneers Francis Crick and Aaron Klug. After working on the structure of chromatin, he turned his attention to Saccharomyces cerevisiae, or baker's yeast, the organism that grows when you make bread and produces carbon dioxide.

By 1987, Kornberg and his colleagues had developed a model that would allow them to take a close look at the biomolecules involved in transcription inside yeast cells. They found, however, that the system did not operate as it should with highly purified RNA polymerase II and the five general transcription factors and a particular binding protein. The model did not respond to the addition of gene-specific activator proteins that are present in living cells and help regulate transcription. This led Kornberg's team to the serendipitous discovery in 1990 of the biomolecule Mediator. Mediator is a complicated molecular complex made from about 20 different proteins and its discovery explained many of the problems facing earlier research. Mediator operates in all eukaryotes from yeast to humans, essentially switching RNA polymerase II on and off in response to biochemical control signals, so that transcription and so protein production occurs at the right time and appropriate quantities of protein are made.

The isolation of Mediator meant the three essential components of gene regulation and transcription in eukaryotes had been established: the general transcription factors, RNA polymerase II, and the switching system, Mediator. However, scientists still did not have a detailed picture of how the various molecules mesh to extract information from the genes and make the proteins themselves.

Painstaking work over two decades using electron microscopy and X-ray crystall-ography, on specially prepared two dimensional protein crystals, finally paid off. The breakthrough came in 2001 when Kornberg and his team published two papers in the journal Science. One described the structure of a 10-subunit yeast RNA polymerase at high resolution and the other provided a picture of an elongating complex consisting of RNA polymerase, the template DNA and product RNA.

When transcription goes awry in our bodies it can lead to cancer, heart disease, pain and inflammation, and other problems. Understanding transcription is therefore crucial to medical research and Kornberg's work has already opened up many new avenues of investigation.