Students from Highgate School, London, overcame strong competition from a field of 27 secondary school teams to take first prize at this year's Top of the Bench national final 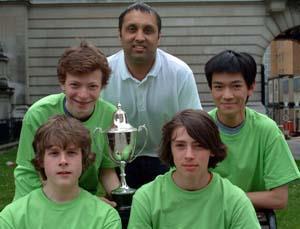 The winning team from Highgate School, London, with head of chemistry, Kamaljit Bains

A team of students from Highgate School, London, overcame strong competition from a field of 27 teams to take first prize at this year's Top of the Bench national final, held in April at the Science Museum and Imperial College in London. Charlie Bruce, Jack Saville, David Ooi and Max Jamilly (pictured right) pipped a team from Bishop Wordsworth's School, Salisbury, to win the Top of the Bench trophy and a £500 cheque for their school to spend on scientific equipment. Clementine Chambon from the European School of Brussels II received the Jacqui Clee award for her outstanding contribution on the day.

Aimed at 14-16-year olds, the final of the competition is organised by the Royal Society of Chemistry (RSC) and run in collaboration with the London Science Museum. To reach the final, the teams, comprising four students (two from Year 9, one from Year 10 and one from Year 11 - or equivalent) had to compete in regional heats, run by the RSC's local sections. In the final the students had to complete a pen and paper task designed to test their knowledge of chemistry, followed by a research exercise in which they had to gather information to answer questions relating to exhibits in the Science Museum's galleries. Finally, the teams made the short trip to the neighbouring Imperial College teaching labs to take part in a race to complete successfully a practical activity designed to test their problem-solving skills.

Speaking to Education in Chemistry after the result, Kamaljit Bains, head of chemistry at Highgate School, said: 'The boys really enjoyed the competition, finding it both stimulating and rewarding. We [Highgate School] have found taking part in the regional and national competitions to be a useful way of promoting chemistry in a relaxed, fun and challenging manner'. Regional heats for the 2009 competition final will take place in the autumn term.

To enter a team schools should contact the secretary of their RSC local section. For further information on the competition contact Lorraine Hart at the RSC.