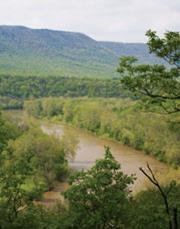 The Shenandoah Valley rivers under investigation

The toxic heavy metal, mercury, can last in the environment and continue to cause environmental problems for much longer than previously thought, according to a study of riverbank and floodplain soils contaminated in Waynesboro, Virginia, US. The soil was contaminated by waste released by a textile manufacturing plant more than half a century ago and remains the major source of mercury poisoning in fish in several Shenandoah Valley rivers.

In a report, highlighting this ongoing environmental problem, Jack Eggleston of the US Geological Survey (USGS) explains that a fifth of a tonne of mercury enters the South River every year from the soil. But, to meet safety standards in fish for human consumption, a reduction of 99 per cent is needed.

During 1929 through to 1950, a textile plant, operated by DuPont, discharged mercury waste into the South River, subsequently contaminating the South Fork Shenandoah River, the Shenandoah River, and the floodplains along the three rivers. It is difficult to know in retrospect whether those responsible for this action gave any consideration to the long-term environmental impact.

Since 1977, however, the Commonwealth of Virginia has enforced a fish consumption health advisory on 200 km of river downstream of the textile plant. Safety standards set by the US Environmental Protection Agency (EPA) state that 0.3 parts per million of mercury in fish are acceptable.

The problem is that high concentrations of mercury occur in fish because mercury accumulates throughout the organism's lifetime. Small fry eaten by bigger, predatory fish allow the mercury to move upwards through the food chain, leading to even more accumulation to the point where people are eating the large fish and thus ingesting potentially harmful quantities of the metal.

In the USGS study, hundreds of water and sediment samples were collected and analysed. Computer models were then used to simulate water, sediment and mercury movement in the South River watershed. These showed the possible routes that mercury contamination from more than half a century ago can still be entering the water decades later.

'Now we know why fish continue to have elevated mercury', explains Eggleston. He adds that this understanding of the contaminated soil is the key to undertaking a large-scale remediation programme to remove the toxic metal from the local environment and so prevent it from leaching into the waterways.

DuPont, for its part, is providing financial backing to support the ongoing research.