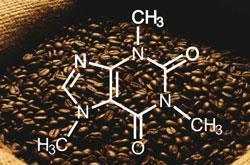 Working out the exact three dimensional structure of molecules, such as caffeine, which contain nitrogen is difficult. Even the powerful technique of X-ray crystallography is not infallible. Now, Canadian scientists have found a way to carry out high-field nuclear magnetic resonance (NMR) spectroscopy to overcome the intrinsic ambiguities in solid-state spectra of nitrogen-rich compounds. Using their technique, Victor Terskikh, and colleagues at the Steacie Institute for Molecular Sciences, at the National Research Council Canada, in Ottawa have found that the structure of caffeine is not quite what it seems.1

Caffeine can crystallise in various polymorphic forms, but crystallography had not identified these definitively, say the researchers. Their results now show that caffeine can exist in a form that cannot be classified as a glassy or plastic-type phase. Key to this anomaly is the formation of hydrogen bonds between caffeine molecules as they pack together in the crystal.

The technique not only reveals a flaw in the known structure of caffeine but could also lead the way to new studies of the shape of other compounds including drugs, agrochemicals and compounds found naturally in the body. The team has demonstrated the power of the technique with other molecules such as tetracyclines. 'Our results may encourage other researchers to use high magnetic fields to work out the structure of other nitrogen-containing compounds', says Terskikh.