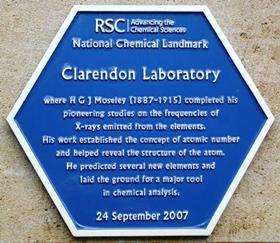 The pioneering studies on the frequencies of x-rays emitted from elements done by physicist Henry Moseley has been awarded a Royal Society of Chemistry (RSC) National Chemical Landmark. Dr John Hood, vice-chancellor of the University of Oxford, unveiled a commemorative plaque at a ceremony in September at the university's Clarendon Laboratory. The award is the 21st to be made as part of the RSC's programme to recognise major achievements in the chemical sciences and bring them to the attention of the public. In an opening address to the day's celebration, Professor Roger Davies, chairman of physics at Oxford University, noted that the presentation of a chemical award to a physicist working in a physics laboratory reflected that 'excellent research transcends traditional subject boundaries'.

Born in Weymouth in 1887, Moseley was educated at Eton and then at Trinity College, Oxford, where he studied physics. After graduating he moved to Manchester University to work in Ernest Rutherford's laboratory. Moseley initially contributed to Rutherford's research into natural radioactivity. However, with Max von Laue and the Bragg brothers reporting progress in the diffraction of x-rays using crystals he persuaded Rutherford to allow him to study x-ray spectra.

Moseley's law proved that atomic numbers were related to a physical property of the elements, ie its nuclear charge. He used these to reorder the elements into the Periodic Table we recognise today and in so doing allowed him to predict the later discovery of several elements (such as hafnium (Z = 72) and rhenium (Z = 75)). At the time Moseley's results refocused scientists' attention on Rutherford's work on atomic structure as well as supported Niels Bohr's quantum theory of the hydrogen atom.

Moseley remained with Rutherford until 1914 before returning to Oxford to further his research career. However, upon the outbreak of World War I Moseley put his research on hold and enlisted in the Royal Engineers. Later despatched to the Dardanelles as a signalling officer, he died during the ill-fated Gallipoli campaign in 1915, killed by a sniper's bullet to the head.

Talking about Moseley's legacy Joseph Nordgren, professor of soft x-ray physics at the University of Uppsala, Sweden, said that Moseley's early death left the scene open for a Swedish group to take forward research into X-ray spectroscopy, the team's leader Manne Siegbahn receiving the Nobel prize in physics in 1924. Although Moseley was nominated for a Nobel prize by Svante Arrhenius in 1915, his death that year precluded him from being considered for a prize.

Today scientists have benefited from the enormous advances in technology used to produce x-rays, in particular the development of powerful, synchrotron facilities such as the new Diamond Light Source Centre which opened earlier this year at the Harwell Science and Innovation Campus.