Nitrogen in a fix

US chemists get in a fix with nitrogen and hafnium 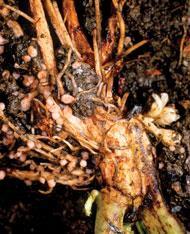 Nitrogen-fixing Rhizobium bacteria get to the root of the problem

We live in a vast nitrogen ocean - the atmosphere that surrounds us is 78 per cent nitrogen gas - but we have no way to use it easily other than in making ammonia. In contrast, nitrogen-fixing organisms have been exploiting the gas for millions of years.

Paul Chirik of Cornell University, US, wants us to catch up. Countless prescription drugs, polymers and plastics, and common agricultural chemicals contain carbon bonded to nitrogen atoms but getting those two together is difficult. 'I think we as a society, in order to move forward, can't be lazy and just use oil. We're going to have to figure out ways to develop new chemistry to use what's around us better.' And, that means finding simple ways to fix nitrogen.

The trouble is that each nitrogen gas molecule is comprised of two nitrogen atoms held together by a strong triple bond. In its natural state it is relatively unreactive, which is one reason why there is such a lot of it about.

Chirik and his colleagues have found a way to break the strong triple bond in the laboratory and simultaneously create new bonds between carbon and nitrogen.1 The key to their success was to side-step the energy-intensive, fossil fuel-burning step of first making noxious ammonia and then using this to feed into the chemical synthesis.

Chirik, working with graduate student Donald Knobloch and research associate Emil Lobkovsky, made a compound, known simply as a 'complex' of nitrogen and the metal hafnium. The hafnium adds electrons to the nitrogen atom and weakens the strong triple bond. They next added carbon to the mix by bathing the complex in carbon monoxide gas. This breakthrough step allows the carbon's electrons to complete the nitrogen split. The carbon atoms then form bonds to the nitrogen atoms without the high temperatures and pressures that are usually a prerequisite for cleaving nitrogen.

One approach to making the reaction more effective involves adding a small amount of hydrochloric acid to the chemical reaction. However, while this works well, it leaves behind an oxamide residue and cannot be scaled-up for industrial use. The team now hopes to turn this reaction into a catalytic process, one that would work on the industrial scale, allowing the hafnium to be recycled as part of the process.