Nobel chemists get the green light

The discovery of the green fluorescent protein, which is providing researchers with new insight into various diseases, wins 2008 Nobel chemistry prize 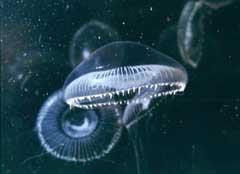 The 2008 Nobel Prize in chemistry has been awarded jointly to Osamu Shimomura, of Boston University, Massachusetts and Martin Chalfie, of Columbia University, New York and Roger Y. Tsien, of the University of California San Diego, in La Jolla for the discovery and development of the green fluorescent protein, GFP, found in jellyfish.

So, how can a glowing jellyfish protein be worthy of a Nobel Prize?

Aequorea victoria drifts with the currents off the west coast of North America and is remarkable in that it produces a green and eerie glow. In the 1960s, Shimomura was studying bioluminescence, the chemical reactions within living organisms that produce light. He had isolated a bioluminescent protein that gave off paradoxically blue not green light from A. victoria. His follow-on studies revealed in 1962 a second jellyfish protein that absorbs the blue light from the first and re-emits it as a green glow. The protein was later to become known as green fluorescent protein (GFP).

In 1988, Chalfie heard about GFP for the first time and a light went on. He reasoned that this unassisted fluorescence might be used as a beacon in cells to flag different processes. He engineered the gene for GFP into the DNA of the molecular biologist's favourite worm Caenorhabditis elegans. Its cells glowed green without the need to add any biochemical agents and without harming the worm. Subsequent work showed that it was possible to fuse the gene for GFP to genes for other proteins, opening-up a method for tracking the specific proteins in living organisms.

For his share of the Nobel Prize, Tsien added to the general understanding of how GFP, and relatives from other luminescent organisms and genetically engineered varieties, actually fluoresces. He worked out the biochemical reaction sequence that leads from the unfolded, inactive protein, via cyclisation, dehydration and oxidation of specific amino acids in the protein chain, to the modified, folded form that has the glowing report. Proteins from other species were found that glowed with different colours. However, genetic engineering of the amino acid sequence in GFP and these proteins can be used to tweak the amino acid sequence so that a different final chromophoric unit in the protein is produced that has a different emission spectrum and so glows with a different colour. There are now variants of GFP available to scientists that cover the whole of the visible spectrum.

As with the chemistry prize of earlier years, the award has been made for basic research that turned out to have far-reaching implications and applications. On the surface, the work is biological in nature, but most certainly demonstrates chemical prowess at the fundamental level.

Living systems use tens of thousands of different proteins. Each controls at least one important biochemical process but when a single protein goes awry, the molecular machinery can fail, and illness and disease ensue. That is why it has been imperative for bioscience to map the role of different proteins in the body. Such insights will provide medicinal chemists and others with targets for therapeutic agents that repair, disable, or re-activate the errant proteins.

With the aid of GFP, researchers have developed ways to watch processes that were previously invisible, such as the development of nerve cells in the brain or how cancer cells spread. And, with the application of DNA technology, they can now connect GFP to otherwise invisible proteins. This glowing marker allows them to watch the movements, positions and interactions of the tagged proteins and how they respond to the presence of their natural target molecules, toxins, environmental pollutants, bacterial metabolites, and drug candidates.

A spectacular demonstration of just how far GFP technology had progressed within a few years of Tsien's pioneering work was done by researchers at Washington University School of Medicine in Missouri in 2000. They engineered mice to have red, green, yellow or cyan fluorescent proteins associated with different types of nerve cell. This rainbow of coloured tags was then used by others to follow the fate of cells in models of brain diseases such as Alzheimer's. The same approach can be applied to other tissues, such as the insulin-producing β-cells in the pancreas, which is important for understanding metabolic problems and diseases.

Looked at superficially, the 2008 Nobel Prize for chemistry may appear to be reward for a biological discovery. However, the inner workings of biological systems are built with molecular machinery, and so while the compounds may be natural, they are most definitely chemicals.

David Bradley is a freelance science writer based in Oxford