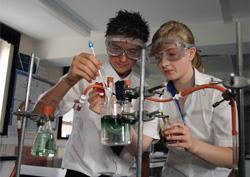 New evidence shows that a worrying number of students are not experiencing a complete and authentic education in the sciences, due to a lack of resources for practical work.

Research commissioned by SCORE (Science Community Representing Education), a collaboration of leading science organisations, shows that on average, state-funded secondary schools and sixth form colleges have just 70% of the equipment and consumables that SCORE has identified as being essential to teach science subjects.

The research is published in two new reports on resourcing practical science, which were launched in London on 2 May. The data comes from a survey of teachers at primary and secondary schools and sixth form colleges.

Julia Buckingham, chair of SCORE, said: 'Taking part in practical work is an integral and essential part of learning the sciences, but our findings indicate that teachers do not feel equipped to give their students the full learning experience that they should be able to. Practical work is being limited by missing equipment and a lack of access to appropriate facilities such as laboratories and outside space.'

Secondary schools reported not having enough of some of the most commonly used equipment, such as microscopes, eye protection and connecting leads for circuits. The research also shows that many secondary schools lack essential support from qualified technicians to carry out practical work.

The reports reveal some particularly concerning data on the amounts that schools are spending on practical science, which varies greatly from school to school.

The reports show some further worrying statistics about science spending in schools:

Julia said: 'Given the increasing control schools have over their own budgets, some variation in spend between schools is probably to be expected. But the extent of the variation we have seen suggests a worrying inconsistency in the way funding is allocated both to and by schools, which will have a knock-on effect on the experiences of their students.

'Low resourcing for practical work is a long-term problem and not one that is a simple matter of lack of government funding. Schools must share part of the responsibility for allocating funding for this important aspect of science learning.

'We need teachers to feel that they can make a strong case for practical science spend when school budgets are being decided. So to support them, SCORE has produced a set of benchmarks that provide common guidance on what levels of resourcing should be expected for practical science. These outline the quantities and specifications for equipment and facilities that we consider reasonable to enable teachers to provide engaging and inspirational lessons across the sciences.

'Practical work demonstrates the wonder of science so much more effectively than words on a page or pictures in a textbook. To inspire the next generation of scientists, we need to ensure that all pupils are exposed to the excitement and increased understanding of science that carrying out practical work
can bring.'

@RSC_EiC tweeted live from the launch of the report: