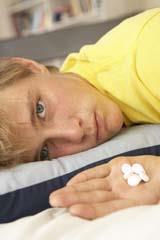 What's the problem with Prozac?

It has been claimed that Prozac (fluoxetine, 1) and other antidepressants do not do their job.

The results of some clinical trials were positive, yes. However, in April analysis by Irving Kirsch of the University of Hull and colleagues on the results of 47 clinical trials involving four different antidepressant drugs showed that a lot of unpublished research indicated these drugs were little more effective than a placebo in treating patients with mild to moderate depression. Only in the case of severe depression were these drugs shown to have a marked effect on patients' condition compared to placebo groups.

Why did prozac become so important?

The drug was discovered in 1972, and was brought onto the market by Eli Lilly in 1986-7. Prozac revolutionised the treatment of depression.

Until ca 40 years ago depression was a relatively rarely treated condition. Early drug treatments, for example, monoamine oxidase inhibitors and tricyclic antidepressants, tended to target a number of receptors, so they came with a variety of side effects. Prozac and its successors are more selective, so there are fewer side effects.

How does the drug work?

Prozac is one of the selective serotonin reuptake inhibitor (SSRI) class of drugs. Serotonin (5-hydroxytryptamine, 2) is a signalling molecule (neurotransmitter) in the brain. Levels of serotonin in the brain affect mood. People suffering from depression tend to have low serotonin levels.

How does an SSRI help treat depression?

In the brain, messages are passed between two nerve cells (neurones) via a synapse, a small gap between the cells. Neurotransmitters, such as serotonin, are released by the transmitting neurone into the gap. These chemicals diffuse across the gap and are recognised by receptors on the receiving (postsynaptic) neurone, initiating a nerve impulse. Only a fraction of the neurotransmitters are lost in this process; the majority are released from the receptors and taken up again into the transmitting neurone (reuptake). An SSRI inhibits the protein involved in the reuptake of serotonin, thus increasing the levels of the neurotransmitter in the synaptic gap and so the molecule is more readily recognised by receptors on the postsynaptic neurone.

I'm afraid so. One accusation levelled against Prozac and other SSRIs is that, in some cases, they lead to violent and suicidal behaviour. Recently, the UK's Medicines and Healthcare products Regulatory Agency (MHRA) investigated claims that GlaxoSmithKline (GSK) withheld information on the dangers of young people using its SSRI drug, Seroxat. The regulator concluded that GSK could have disclosed, much earlier, data relating to the risk of suicidal tendencies in under-18s using the drug.

So these antidepressants should not be seen as 'instant happiness' pills. People suffering from mild depression may get better without drugs, given better diet and lifestyle, as well as good advice on their approach to life. Yet there are many people who say that Prozac and other SSRIs are the only treatments that have worked for them, enabling them to carry on living normal lives.