Rationing the drugs for Alzheimer's disease

The National Institute for Clinical Excellence (NICE) finds itself in the firing line once again - this time for its refusal to allow open access to the Alzheimer's disease (AD) drug Aricept (1). This drug is one of a family that inhibit the enzyme acetylcholine esterase, whose main role is to remove the ethanoate group (ester hydrolysis) from the neurotransmitter acetylcholine once it has exerted its effect. This is of particular relevance in Alzheimer's disease because the brains of patients with this neurodegenerative condition have a deficiency of acetylcholine and of acetylcholine receptors. By sparing the neurotransmitter from hydrolytic deactivation, the cognitive performance of the patients can (in some cases) be improved. Unfortunately, these drugs only slow down the loss of cognitive functions and are not curative. 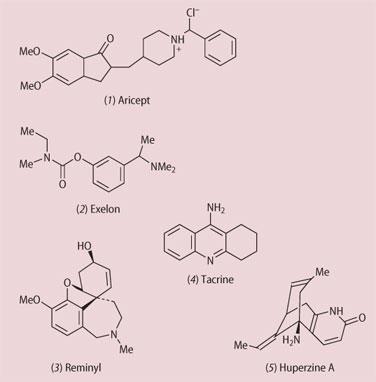 Four of these enzyme inhibitors have been approved for the treatment of mild to moderate Alzheimer's disease and these are aricept (donepezil hydrochloride, 1), exelon (rivastigmine, 2), reminyl (galantamine, 3 - obtained originally from the bulbs of snowdrops and narcissi), and tacrine (4) (though this is very toxic). These drugs require a prescription from a consultant and are not easily available from GPs. Several other compounds are under clinical evaluation and of these huperzine A (5), from the Chinese club moss Huperzia serrata, is probably the most interesting because it has a long history of use in Chinese folk medicine as a treatment for enhancing cognition in the elderly. Indeed, the plant extract is widely available for purchase via the Internet.

Alzhiemer's disease is a real problem and will increase in prevalence as the average age of the population rises. The incidence of AD in the 60-65 age group is ca 1 per cent, but this rises to more than 30 per cent in people older than 85, and may be as high as 50 per cent. So, though a cure for the condition is unlikely to be discovered in the near future, the importance of any new drug that enhances or maintains quality of life for AD sufferers cannot be over-emphasised. Unfortunately, none of the acetylcholine esterase inhibitors mentioned produce dramatic improvements in cognition, and all are associated with some adverse side effects. NICE has thus far erred on the side of caution but it can expect continuing pressure for their release for more general use.