The RSC is inviting nominations for their 2012 Education Awards

The awards are made annually to those who have made a significant contribution to the teaching or promotion of the chemical sciences. There are three awards, each with a prize of £2000. 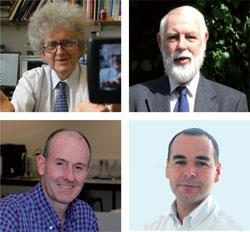 Details about the awards and how to make a nomination are available on the RSC website. The deadline for nominations is 31 January 2012.

The 2011 winners were announced this summer.

This year the biennial Nyholm Prize for outstanding accomplishment in education relating to the chemical sciences, was awarded to Martyn Poliakoff from Nottingham University. He was recognised for his enthusiastic leadership in taking chemistry to the widest possible audience, using not only traditional channels, but also the power of YouTube. He was described as 'a true champion for chemistry'.

John Oversby from the University of Reading received the 2011 Education Award for services to chemical education, especially in the field of classroom based research.

The Higher Education Teaching Award was won by David McGarvey, from Keele University, in recognition of the significant contribution he has made to chemistry education at the third level for over a decade. The award was made in particular, for his implementation and evaluation of innovative and carefully-designed teaching and assessment methods.

David Fox from Pfizer Worldwide R&D, Sandwich, received the Inspiration and Industry Award for his pioneering efforts to excite and inspire students at all levels through the Discover Chemistry initiative, which has had national impact on chemistry outreach and education.

The RSC has over 60 prizes and awards in total, covering all areas of the chemical sciences. The Nyholm Prize, established in 1973, is the oldest of the RSC Education Awards.