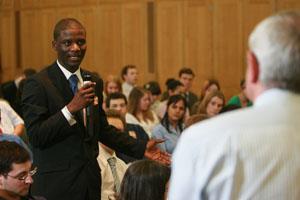 Young scientists have their say

In March at a forum organised by the Royal Society of Chemistry (RSC), science minister Malcolm Wicks defended the Government's recent decision to cut the research councils' budget by £68 m. Speaking to more than 200 young scientists and engineers at the Voice of the future meeting held in Westminster's Portcullis House, Wicks emphasised the important role these disciplines will play in tackling current world issues such as global warming, the treatment of chronic long-term illnesses like cancer, and the provision of water and food in Africa.

But when a young scientist put it to Wicks that the claw-back of research funding represented a change in the Government's policy to support science and innovation Wicks denied this and said that, though not a comfortable decision to make, it was necessary to cover DTI costs, which include those incurred by the collapse of MG Rover and support needed to cover British Energy's nuclear liabilities.

The diverted funds represented only a fraction of the annual research budget of £2.8 b, which is part of a UK science budget that has more than doubled since 1997 and will rise a further 25 per cent from £5 b this year to £6.3 b by 2011 following Gordon Brown's budget announcement at the end of March. However, this will not alter the fact that research councils such as the Engineering and Physical Science Research Council (EPSRC), which has lost £29 m from its budget through the claw-back, will have to cut research grants.

At the RSC event the young audience took the opportunity to quiz a panel comprising members of the science and technology select committee on science issues, ranging from energy supply and security through sustainability to science and the media. On science education the committee was asked whether creationism should be taught in UK schools. The panel agreed that the belief had no place in science lessons.

The committee also agreed that the idea of a future HE sector where research and teaching are separated and supplied by different universities would not be welcome. Speaking from experience as a chemist himself, Dr Brian Iddon MP commented that his research had helped refresh him with new ideas which enlivened his lectures to undergraduates.

One young scientist asked the panel if it thought the Government's drive to widen participation in HE among 18-30-year olds to 50 per cent had devalued degrees. Although Dr Des Turner welcomed the Government target, he predicted that such an increase in participation would not be achieved across all subjects, in particular science, technology, engineering and mathematics (STEM) subjects. Dr Richard Pike, chief executive of the RSC and an invited guest on the panel, commented that to achieve this goal the types and content of courses delivered by universities would have to change.