Organic light-emitting diodes (OLEDs) offer low-power, full-colour, flexible displays for devices such as mp3 players, mobile phones and portable computers. However, some OLED components are inefficient and expensive. Now, Myung-Gyu Kang and Jay Guo of the University of Michigan, Ann Arbor, US, have developed a new approach to making the electrodes for OLED devices that could cut power consumption and make them cheaper. The same method could also be used to make solar energy panels using OLEDs.1 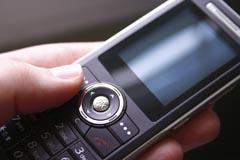 A simple OLED is formed by sandwiching a layer of an organic semiconductor between positive and negative controlling electrodes. The electrodes have to be very thin to be efficient. However, atoms in such thin layers of the common electrode material indium tin oxide (ITO) easily diffuse into the OLED layer itself, leading to device breakdown as the chemical structure of the OLED layer is disrupted.

Other researchers have investigated novel materials, such as titanium nitride, doped zinc oxide, and fluorine tin oxide, as alternatives to ITO. However, while these materials are not susceptible to diffusion they are far less efficient than ITO. Lower efficiency means the device needs more power, which in turn means shorter battery life, thus negating one of the main advantages of OLEDs over conventional inorganic-based display devices.

Kang and Guo believe their method can circumvent all the problems associated with previous electrodes. They use nanoimprint lithography (NIL) to create semitransparent electrodes that do not need expensive metallic elements and, because of their structure, are less susceptible to atomic diffusion problems.

The researchers based their new electrodes on a densely perforated thin film of metal supported on a glass layer. The glass layer used in the test devices will be swapped for a suitably flexible material in real applications. The perforations make the metal layer almost transparent, which means it can be the top electrode in an OLED because it will allow light through.

The researchers can fine-tune the fabrication process to make the perforations smaller or larger and to change their spacing. This enables them to adjust the transparency of the metal layer at different wavelengths of light, allowing different colours to shine through. Importantly, NIL can be used to make an electrode with an enormous area, far bigger than a mobile phone display, and so open up OLED technology to a wider range of applications, including notebook computers and giant-screen TVs that would use little electricity but produce a great image at almost any viewing angle.

To demonstrate the potential of a semitransparent metal electrode, the team constructed an OLED using copper as the metal to be patterned. The organic layer comprised poly(styrenesulfonate)-doped poly(3,4-ethylenedioxythiophene) as the conducting layer and poly(2-(2-ethyl-hexyloxy)-5-methoxy-1,4-phenylenevinylene) as the light-emitting layer. They made the opposite electrode from a thin layer of lithium fluoride and aluminium. In tests, the device performed just as well as a conventional OLED, showing high transmittance of visible light and excellent electrical conductivity.

The researchers found that their NIL electrodes had a brightness equal to conventional OLEDs. 'Our results indicate that NIL electrodes are very promising not only because they avoid the disadvantages of ITO but also because they can be fine tuned for different applications, including organic solar cells', says Guo.