Lisa Murphy has won the ICI-sponsored Top Chemistry Student award at this year's Science, Engineering and Technology (SET) Student of the Year awards 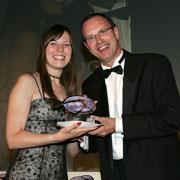 Lisa Murphy, a chemistry graduate from the University of Durham, won the ICI-sponsored Top Chemistry Student award at this year's Science, Engineering and Technology (SET) Student of the Year awards. Murphy collected her award trophy and £500 at a prizewinners' ceremony held at the Royal Courts of Justice in London in September.

Organised by the World Leadership Forum and supported by many of the UK's leading employers and professional bodies in the science and engineering sectors, the competition recognises the achievements of outstanding SET undergraduates in their final-year research projects.

Students are initially assessed on the basis of a written report and citation from their research project supervisors, and finally by a panel of judges.

The judging panel for chemistry, comprising Royal Society of Chemistry and ICI representatives, chose Murphy as its award winner on the basis of her project in Dr Ritu Kataky's group in the centre for bioactive chemistry at Durham.

The Kataky research group focuses on developing chemical sensors and sensing techniques for physiological and environ-mental applications. Murphy's project, Chiral electrochemical detection of 1-phenylethanol; a key intermediate in many pharmaceutical syntheses, was part of the research group's work to meet Dowpharma's request for a fast, accurate, simple to use, portable and cheap electro-analytical detector for 1-phenyl-ethanol (PE) enantiomers.

According to Kataky, Murphy started the project with no background in electrochemistry. Despite this she managed to design an electrochemical sensor incorporating chiral catalysts and a new chiral molecule that mimics an enzyme, which catalyses the reversible alcohol to ketone (or aldehyde) conversion. Results from tests against PE showed that the molecule gave enhanced chiral recognition.

Kataky told Education in Chemistry, 'Lisa's work will be forwarded for a patent application and the group is currently applying for further funding to advance its work on novel sensors'. Murphy is currently working as a PhD in Dr Gareth Williams' group at Durham on the synthesis of light-emitting molecules for sensors.