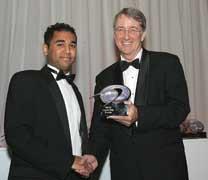 In September Vijay Chudasama, first-class honours graduate from University College London (UCL), claimed the 3M award for the Best Chemistry Student at the 2008 Science, Engineering and Technology (SET) Student of the Year Awards. Chudasama collected his award at the Royal Lancaster Hotel in London as part of a prizewinners' ceremony attended by over 500 students, academics and industrialists.

Now in their 11th year, the SET awards are designed to raise the profile of SET subjects in the UK. Awards in 15 SET subjects are judged by members of professional SET bodies and supported by global SET-based companies. The competition recognises the achievements of SET undergraduates in their final-year research project. Students are initially assessed on the basis of a written report and a citation from their research supervisor. On the day of the ceremony a judging panel for each award interviews three short-listed finalists and selects a winner.

The chemistry prize judging panel, comprising representatives from the Royal Society of Chemistry (RSC) and 3M, chosen Chudasama for his project on the synthesis of functionalised oxazoles, imidazoles and thiazoles. Working in Dr Jonathan Wilden's group at UCL, he designed a multi-step synthetic route to multi-substituted versions of all three of the 1,3-azole aromatic molecules. Wilden told Education in Chemistry, 'Vijay was an invaluable asset to my group and he really drove the research forward. His work will lead to several important publications and he already has a paper in Chemical Communications'.

Oxazoles, imidazoles and thiazoles are five-membered ring heterocycles. These compounds have many applications. 'Some 90 per cent of all new drugs contain at least one heterocyclic unit and oxazoles, imidazoles and thiazoles present in natural products derived from microbial and marine organisms exhibit potent antiviral, anti-inflammatory and antitumor activity', explains Chudasama. 'Advances in organometallic chemistry have extended the scope of imidazoles as ionic liquids while thiazoles have found applications as liquid crystals and cosmetic sunscreens'.

The organic chemistry theme of his final-year project satisfied Chudasama's passion for doing synthetic chemistry in the lab and provided and excellent opportunity to develop his practical skills. 'But the most important outcome was making a contribution to science through my first publication', he says.

Chudasama's SET award caps a distinguished undergraduate degree, for which he won UCL's Faculty of Mathematical and Physical Sciences medal and prize. Now working towards a PhD in Professor Stephen Caddick's organic chemistry and chemical biology group, he recently received a Graduate School Research Scholarship, which is awarded to the top 15 students at UCL, across all faculties, for outstanding academic achievement. 'My longer-term plan is to become an academic and get more people interested in chemistry', he told Education in Chemistry.

The two other 3M finalists were William Farnaby from the University of Manchester for his synthesis of enantioselective tertiary alcohols and Bristol University's Ben Truscott for his project on laser-induced fluorescence spectroscopy.