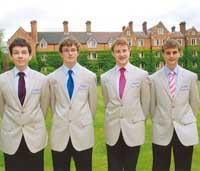 In July the University of Cambridge hosted the finals of the 41st International Chemistry Olympiad competition and the UK team of four A-level students made the most of the home advantage by winning four silver medals. Not since 1994 have all members of the UK team achieved better than bronze. Their results put them in the top 30 per cent of the 266 competitors from 66 nations.

The sixthformers - Peter Bullock of RGS Worcester and the Alice Ottley School, Charlie McTernan of Haberdashers' Aske's Boys' School, Ian Houlsby of Abingdon School and Robert Owen of Tonbridge School - were selected following three qualifying rounds of tests, run by the Royal Society of Chemistry (RSC) with support from the chemical company INEOS to engage all UK schools and colleges in the competition. In the finals, the students were tested on their knowledge of chemistry and practical skills in two five-hour exams. The practical exam involved three tasks, one of which required the students to design an experiment to measure the concentration at which surfactant molecules in solution start to form bundles. The theory exam tested students' mathematical skills, ability to interpret nmr spectra and knowledge of physical, inorganic and organic chemistry.

Commenting on the result, UK team mentor Dr Rob Paton told Education in Chemistry, 'The standard at the competition is tremendously high, and so the team's achievement is seriously impressive'.

In 2010 the 42nd International Chemistry Olympiad competition will be held at Waseda University, Tokyo, Japan. Upper-sixthform students can find out more about the competition and register online for the qualifying rounds for the 2010 team selection at the RSC website.