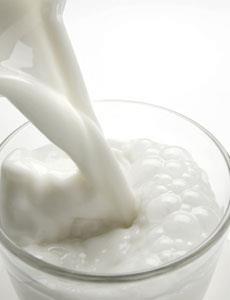 Researchers in the US have shown that a high-pressure food-processing technology may offer a way to extend the shelf-life of milk without affecting its flavour.

Fresh milk contains disease-causing bacteria, eg those responsible for tuberculosis and typhoid. Left out at room temper-ature these and other bacteria will cause milk to spoil. To destroy such bacteria, milk is pasteurised.

Commercial pasteurisation involves heating milk to 72°C for 15 s and then cooling rapidly to below 10°C. Stored in refrigerators pasteurised milk has a shelf-life of 20 days. Longer-life milk, known as UHT (ultrahigh temperature) milk, is pasteurised by heating to 135-150°C for 3-5 s. The resultant UHT milk has a shelf-life of ca six months at room temperature. However, the UHT process causes the formation of chemicals in the milk, such as volatile sulfur compounds (eg hydrogen sulfides), methyl ketones and aldehydes. According to food scientist Michael Qian and his team at Oregan State University, these chemicals impart a 'cooked' flavour to the milk, which has limited the popularity of UHT milk with consumers.

So Qian and his colleagues investigated the effects of using high hydrostatic pressure processing (HPP) to 'pasteurise' milk. This involves putting foods under pressures that crush and kill bacteria.

The researchers processed milk samples at pressures of 482, 586 and 620 MPa at ambient temperature (25°C) and heated to 60°C for one, three and five minutes. To make comparisons they heated other samples to 25°C, 60°C and 80°C for the same periods. The group used advanced gas chromatography to analyse each sample for any trace of volatile compounds.

Reporting their results in the Journal of Agricultural and Food Chemistry, the researchers found that high HPP at room temperature produces few flavour-altering chemicals in milk compared with heat treatment at high temperatures. According to Qian, HPP could produce milk with a 'fresh' flavour and a shelf-life at refrigerated temperature of at least 45 days.