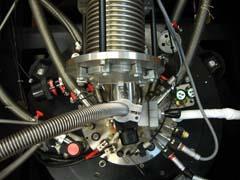 To do the experiment, the researchers used a dilution refrigerator, a device in which the temperature can be lowered to just above absolute zero

Valerii Vinokur and colleagues at Argonne National Laboratory, and others working in Belgium, Germany, and Russia, have prepared a very thin film of titanium nitride, using vacuum deposition techniques, with a view to finding a superinsulator.1 As with superconductors, which have many applications in particle accelerators, spectrometers, MRI (magnetic resonance imaging) machines, and magnetic-levitation trains, the unique properties of superinsulators could be used to improve all kinds of electrical and electronic circuits, sensors and battery shields to prevent premature discharge or short circuits.

'Titanium nitride films, as well as films prepared from various other materials, can act as either superconductors or insulators, depending on the thickness of the film,' explains Vinokur. 'If you take the film which is just on the insulating side of the transition and decrease the temperature or magnetic field, then the film all of a sudden becomes a superinsulator', he adds. 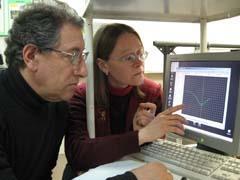 Vinokur points out that a superinsulating material could be used to encapsulate a superconducting wire. Such a coupling would create an almost perfect wire in which virtually no energy is lost as heat. A miniature version of such superinsulated superconducting wires could one day lead to the most efficient electrical circuits possible.

Titanium nitride becomes a superconductor because its electrons form Cooper pairs, which can join to form long chains that allow unrestricted motion of electrons and so reduce the resistance to a current flow to zero. Below the transition temperature the Copper pairs split. This, the researchers say, flips the material from a superconducting to a superinsulating state as the divided pairs suddenly put up an enormous electrical resistance to oppose the flow of current because they no longer form slick chains along which electrons can move unimpeded.