Achieving a gleaming smile is a common aspiration and comes down to a bit of chemistry.

Teeth have a transparent outer layer of enamel 2 mm thick, and an inner layer of white dentine. Both are forms of the mineral calcium phosphate. The enamel layer is hydroxyapatite, which is one of the hardest and most insoluble of minerals. Unfortunately it is also slightly porous, which is why teeth become stained by things like tea, red wine, red berries, and cigarette smoke. 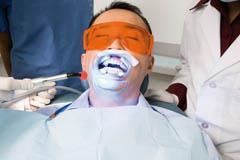 Smile - though your mouth may be aching

A dentist can bleach your teeth by using a paste containing 35 per cent hydrogen peroxide, sometimes in combination with a laser beam - supposedly to speed up the process, though the need for this is questionable - and stains will be gone within the hour. The dentist applies and rinses off the paste several times. This treatment has to be done by a trained professional because concentrated hydrogen peroxide can damage the lining of the mouth.

Dentists in the US also provide a treatment which can be used at home. They make a mould of the teeth into which a strip of hydrogen peroxide gel can be inserted and then pressed against the teeth and left there overnight.

For those of you who prefer a less expensive way of bleaching your teeth, there are safer, over-the-counter products which release hydrogen peroxide slowly. These contain 'urea peroxide' - a hydrogen-bonded complex of urea and hydrogen peroxide. On contact with moisture urea peroxide releases hydrogen peroxide, which then gets to work. To achieve maximum effect, however, these products need to be applied many times. The most convenient way of whitening teeth is to stick a polyethene strip containing the peroxide gel to the teeth and leave it there for 30 minutes. If you repeat this procedure every day for a couple of weeks your teeth will be noticeably whiter.

Whiteness - at what cost?

Those who whiten their teeth should be aware that it has a weakening effect on the enamel. This was reported in 2005 by Michelle Dickinson of Minneapolis, who works for a company that has developed equipment capable of measuring the hardness profile of teeth across the enamel-dentine boundary. Dickinson subjected extracted teeth to seven one-hour treatments of US dental-strength hydrogen peroxide and found that it decreased tooth hardness by as much as 80 per cent. As a consequence the teeth were more sensitive to hot and cold. Her experiments are a warning that teeth whiteners do carry some risk.