A new element on the Table 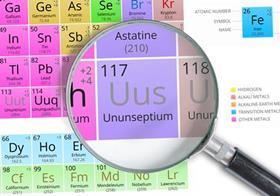 In April an international team of scientists, led by Yuri Oganessian of the Russian JINR (Joint Institute for Nuclear Research) at Dubna believes it has synthesised element 117, Ununseptium (Uus), filling the gap in the row of actinides and transactinides in the Periodic Table.

Before the discovery can be ratified, however, the synthesis will need to be reproduced by an independent team of researchers. Only once this has been done can a name given to element 117 (as has recently been done for Copernicum, element 112). Likewise, more stable isotopes are needed before chemical experiments can be done to establish how element 117 is related to those elements around it in the Periodic Table, especially the halogens above. Could it be a metallic halogen?