The truth about forensic science 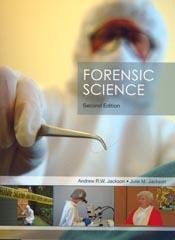 Most people seem to get their ideas about forensic science from TV programmes such as the ubiquitous CSI. These programmes have raised awareness of the subject and have persuaded many to take an interest in (forensic) science. However, CSI is 'Hollywood' and differs in many respects from real forensic science as seen on the streets of, for example, Cricklewood. This book is an excellent overview of true forensic science.

Although aimed at undergraduate students starting a forensic science degree programme or those taking a forensic science module, the book is also accessible to the general reader. Difficult bits are segregated into boxes for easier digestion at a later time by those who are more scientifically inclined.

Each chapter has its proper place in terms of content and location in the text and the coverage of the material is superb. The authors state, 'This book was written to provide a clear and authoritative introduction to forensic science', and they have achieved this goal and, in places, gone much further.

This second edition has had the original chapter on the use of statistics beefed up (questionably too far) and a new section on the characterisation of man-made fibres has been included. The latter material is supported by colour plates, which seem strangely out of place because all the other photographs in the book are in black and white.

Overall, the authors have got everything just about right with this second edition, though I do have two quibbles.

First, the initial chapter is by far the most boring in the book. I would have thought that information on provision and accreditation of forensic science services could have been 'boxed away' near the end.

Secondly, the forensic examination of human remains, which seems strangely popular to general readers, should have been excluded. This topic is mainly the preserve of the medically or anatomically trained expert.