UK students tough it out

UK students medal at the finals of the 39th International Chemistry Olympiad competition, held at Moscow State University in Russia in July 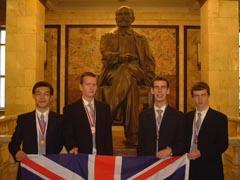 The UK Olympiad team in Moscow

The team of four students, representing the UK at the finals of the 39th International Chemistry Olympiad competition, held at Moscow State University in Russia in July, has returned with a clutch of medals. Competing against students from over 60 countries, Freddie Manners from Winchester College and Matthew Cliffe of Latymer Upper School led the way for the team by winning silver medals while Jerry Zak of Caterham School and Derek Chan of Winchester College were each awarded bronze medals. According to Chas McCaw, a mentor to the UK team, 'this year's Olympiad papers were the toughest in the history of the competition'.

The UK team was selected following three qualifying rounds of tests run by the Royal Society of Chemistry (RSC) and open to all schools and colleges. In the finals in Moscow the students' knowledge of chemistry and practical skills were tested in two five-hour exams. The practical exam involved two tasks. For the first students had to separate a mixture of three amino acids using ion-exchange chromatography and then do qualitative analysis of the resultant fractions, including uv-vis spectrophotometric analysis. In the second practical task students had to determine the carbonate and hydrogen phosphate content of an abrasive powder using titration.

Among the questions in this year's theory exam were problems presented in the contexts of proton tunnelling, nanoparticles, silicates and oscillating reactions which tested students understanding of quantum effects, thermodynamic principles, structural chemistry, and kinetics respectively. You can download the questions and answers from this year's finals.

The 40th International Chemistry Olympiad will be held in Budapest, Hungary in 2008. Upper-sixthform students can register online for the qualifying rounds to select the next UK team and access past papers at the RSC's Chemsoc website.