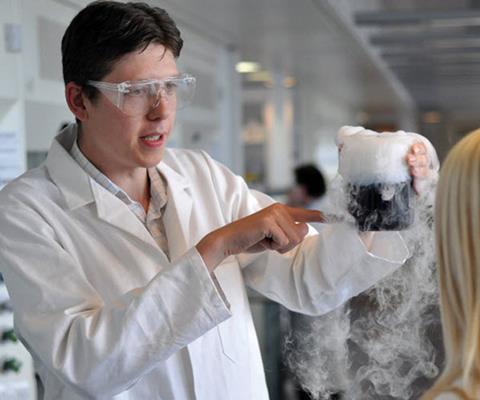 ‘It’s all a load of old waffle’ or words to that effect, according to a colleague with whom I was having a conversation about pedagogic research a couple of years ago. Although the comment was somewhat tongue-in-cheek, the sentiment is one that seems to be held fairly commonly by educators in STEM subjects both at university and school level. Why is this, and is it a problem?

I think it is a challenge for many with a traditional scientific background to adopt the mindset of a social scientist, which helps in understanding pedagogic research. There are probably numerous reasons for this, but a major issue is communication. As someone who trawls through a lot of education research papers, I find that many are difficult to read, being packed with confusing edu-jargon that is difficult to interpret. Let’s not forget that chemistry literature is equally impenetrable to the uninitiated, and learning any new language requires willingness and effort. However, those who disseminate the findings of education research do need to be mindful of their audience, certainly if they want their work to have a broader impact in classrooms, teaching laboratories and lecture halls across the globe.

Having mentioned terminology, it’s worth thinking about paradigms.  A paradigm is a set of beliefs and methods used in carrying out and interpreting research. The mindset of the scientist is typically rooted in the positivist paradigm, which I oversimplify to ‘when we see it, we can believe it’. As scientists, we observe systems to test a hypothesis and collect evidence that we interpret to draw conclusions. We can do this under controlled conditions changing only one variable, and we know that if we repeat an experiment under identical conditions we will get identical results (fingers crossed).

The mere fact that this is simply impossible when dealing with human subjects is probably one reason why some scientists are inclined to reject social science as ‘smoke and mirrors’. This is unfair, as many great minds have worked to develop methodologies to produce results that are as valid as anything produced in the lab, but require a different mindset, or paradigm, to be viewed as such. Positivism can place us in a world of absolutes where we seek solace in certainty (however unattainable it may be), while our social scientist colleagues are quite happy to live within a margin of uncertainty, comfortable in the knowledge that any limitations are acknowledged and accounted for.

The key question; is education research important? If it can improve teaching and learning, then surely the answer is a resounding yes? If you are an educator at school or university, the pressure to enhance teaching is relentless, and unlikely to abate. If those at the chalkface reject education research on the basis of misunderstanding its value, or are simply unaware of it as it is not communicated to them in a clear and accessible manner, then there is a big problem.

Research in the classroom

An example that particularly alarms me is an apparent lack of awareness of the ‘chemical triplet’ in making chemistry difficult for students, ie the challenge of switching between macroscopic, sub-microscopic and symbolic representations. I often ask large groups of chemistry teachers what they know about the triplet, and typically only a small number claim to have any knowledge of it. Considering that almost every other chemistry education research paper mentions the triplet, this represents a damning indictment of the impact such research is having in our classrooms. I know my own teaching has improved dramatically as a result of reading around this topic, having reflected on my practice and refined my delivery as a result, but I too was rather in the dark before I actively engaged with the literature.

One solution is to involve educators directly in the research process, giving them a sense of ownership over it and helping them to better understand the conclusions and validity of such work. Over the last year, the education research news pages have reported on Eilks’ work in the field of Participatory Action Research, which involves teachers in all stages of research projects that have a genuine impact on classroom practice, and similar activity has been reported by Sevian and Talanquer. But teachers are already ridiculously busy and the vast majority will never have the time required to engage meaningfully with a research project in this way. So, the onus is on researchers to get their work ‘out there’.

As my colleague Michael Seery has said, all education research should be published with a clear message about its implications for practice at whichever level it is targeted. Educators, and indeed policymakers, also need to be open-minded and receptive to the findings of such research.  All too often we form opinions based on the limited perspective of our own classroom, seeking verification from likeminded colleagues over coffee. That’s not to say teachers don’t have good instincts; most do. However, education research can provide a fresh perspective and new ideas to enliven teaching and enhance outcomes, but this can only happen if we believe in it and act on it.

There are many unanswered questions that education research can help us to address. Let’s work together to make sure it’s funded, fit-for-purpose and genuinely impactful.

David Read is a professorial fellow in chemical education at the University of Southampton, UK