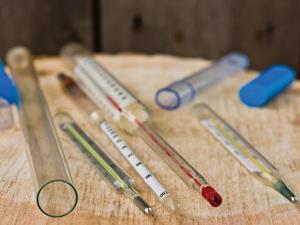 I’m really enjoying Education in Chemistry’s new series on CPD with regards to teaching chemical topics. While these are (I assume) meant primarily for second level, I think there is a lot in them that is applicable across all sectors. The most recent is Derek Denby’s excellent article on energetics.1 I was struck in particular by the (previously) unforeseen confusion that may arise with regards to terms “system” and “surroundings”. The typical diagrams of systems and surroundings is usually followed by an experiment in cup calorimetry, and the link may lead to the conclusion that the walls of the cup are the boundary between system and surroundings. Therefore, in a typical exothermic reaction between say an acid and a base, because the temperature of the solution increases, a student perceiving the walls of the cup to be the barrier between system and surroundings may conclude that it is an endothermic reaction. I don’t know whether this is ever really challenged in the current model of teaching this topic, and it has certainly made me rethink my own approach.

While on the topic of teaching thermochemistry, it is worth flagging a useful review of the research on teaching and learning early undergraduate thermodynamics published recently by Towns et al in Chemistry Education Research and Practice (CERP - free to access).2 This covers various aspects of teaching thermodynamics: the role of maths, students view of matter, and a series of student conceptions. The latter is relevant to the discussion above.

The authors cite research on the first law, and in particular student ideas of enthalpy. In one study, students were shown a neutralisation reaction between an acid and a base, and even after instruction, student responses regarding enthalpy did not improve (whereas they did with other aspects such as pressure-volume work). Is this a sign that these conceptions of enthalpy are particularly difficult to shift? A further study cited showed that students were able to identify endothermic and exothermic reactions correctly, but that “students’ responses described heat as transferring between reactants, rather than being consumed and generated by the breaking and forming of bonds.” This is addressed in Denby’s EiC article—he argues that early stage chemistry should consider energy changes in the context of making and breaking bonds rather than “energy stores”, a concept more common in physics.

However even if it is used, the “energy stores” concept may not be as clear as we might think. In their analysis of the Thermochemistry Concept Inventory (TCI), also published recently in CERP,3 Wren and Barbera describe the responses from a large sample of students to the question shown. Less than 1/3 of the students answered this correctly, with the majority choosing answer ‘C’. 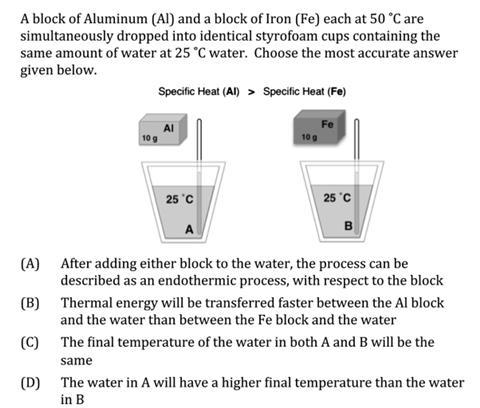 Question from Wren and Barbera TCI (Used with permission)3

So what can we do? I suppose the first approach is to diagnose what ideas our students have about various thermochemical concepts, and the Wren and Barbera TCI is available from the authors. Then we can begin to look at what chemical education research says about how we might teach these concepts. In this regard, Denby’s article is a very good start.