Boyle: Between God and science 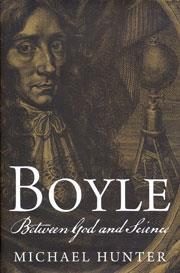 Our view of Boyle as simply 'the father of chemistry' and the most famous British natural philosopher before being eclipsed by Isaac Newton has been completely transformed during the past 30 years. Hunter and his acolytes have played their part by trawling through the huge archive of Boyle's papers at the Royal Society to produce new editions of his published and unpublished works, correspondence and laboratory notebooks.

We now know that Robert Boyle (1627-91), a rich and privileged Anglo-Irish aristocrat, only began to be interested in science when he was in his early twenties. Before then he was a religious ascetic and cerebral moralist. His devoutness remained when he became an ingenious experimentalist devoted to the demonstration that an atomic or corpuscular philosophy was a better way of understanding God's creation than the pagan Aristotelianism and Paracelsianism of his day. Of the latter, he believed, was propelling scholars towards atheism and infidelity.

Hunter's brilliant new biography of a man of insatiable curiosity, while not eschewing analysis of Boyle's scientific attainments - the pressure law, combustion analysis and flame tests etc - and his huge, rather chaotic, literary output, is more concerned to present Boylein the round as a Christian virtuoso who saw experimental philosophy as a way of understanding and justifying God's purpose and design. Besides being potentially useful, Boyle believed the mechanical philosophy underwrote religion.

Chemistry teachers will be intrigued by Boyle's intense interest in alchemical transmutation and effluvial phenomena as ways of justifying corpuscularianism. Readers interested in the Scientific Revolution, the relations between science and religion, or what it was like to be a man of science and wealth during the English Civil Wars will find much of value in Hunter's masterly study, which is accompanied by a 34-page, bibliographical essay to aid further study.