Chemistry was their life

John Nicholson reviews the history of the early female chemists 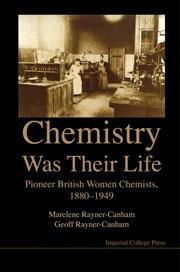 The latest figures suggest that, today, some 57 per cent of chemistry undergraduates in the UK are women, but it was not always so. About 100 years ago, a few pioneers struggled against indifference or outright opposition from men to establish themselves as chemists. This book gives us an insight to who they were and what they achieved. The authors have worked hard in recent years to document the careers of these early women chemists, and while the book focuses on British women chemists during 1889-1949, it also includes biochemists and pharmacists.

Chemistry was their life is divided into 13 chapters. Notably The professional societies  explains that the Chemical Society was probably the worst of the learned societies in refusing women entry, even though a clear majority of the existing fellows had voted in favour of admitting them. Other chapters deal with the universities and how they coped with women chemistry students. In The role of chemists' wives we learn that several distinguished male chemists, including Sir Robert Robinson and Sir Christopher Ingold, were married to women who were able chemists in their own right.

The book includes numerous potted biographies of women chemists. A few, such as Dorothy Hogkin Crowfoot, Elsie Widdowson and Ida Smedley McLean, had successful careers by any standards. Many others, however, were beaten back by the obstacles they faced, and either disappeared into the obscurity of acceptable careers, such as school teaching, or married and had to give up work in chemistry altogether.

Overall, this book is an excellent and highly readable account of how far women have come in our society. In a world where, in places, the education of women is still illegal, it is a timely reminder that the battle for women's education has not yet been won. At £47 I think the book is good value for money and would be a worthwhile addition to any library.