Giant molecules - from nylon to nanotubes

Leonard H. Winning reviews this informative and interesting read for teachers and students 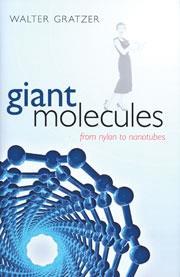 What do you see in your mind's eye when you think of the word 'molecule'? Probably something small, like water or methane, or a moderately-sized natural product, like caffeine or cholesterol. Giant molecules - from nylon to nanotubes will challenge you to think much bigger.

Written as a popular science book, this is nonetheless an informative and interesting read for undergraduates, teachers and lecturers while also being accessible to sixthform students.

Gratzer sets out to give his readers an extensive tour, 'from nylon to nanotubes', though this title belies the significant biological content. The book opens with the historical development of the concept of macromolecules and a brief summary of the basic principles of chemistry, sufficient to support the ideas developed in later chapters.

The first giant molecules to be tackled are the biological macromolecules, which are dealt with in some depth, encompassing carbohydrates, proteins and DNA. A chapter on carbon and nanotubes follows, and then an in-depth one on plastics, tracing their development from 16th century soured milk recipes to today's ubiquitous PET bottles.

These accounts are seasoned with historical vignettes of chemists and their work, ranging from the lukewarm reception of Arrhenius' ground-breaking doctoral thesis to Ziegler's serendipitous discovery of polymerisation catalysts.

There follows a tour of the many uses of giant molecules both established and putative, such as adhesives inspired by geckos' feet and semiconducting polymers for organic light emitting diodes (LEDs). Finally, Gratzer returns to biological macromolecules, outlining the technological potential of DNA for nanomachines, nanobots and alternatives to the silicon chip.

The diversity of historical, chemical and technological information, coupled with the author's easy style make this comfortable recreational reading, with illustrations that bring clarity to some difficult ideas. Well-indexed and supported by an extensive bibliography for those wanting to pursue the ideas further, it is a book in which everyone will find something of interest and be encouraged to think big as well as small when considering the molecular world.