It's a gas DVD 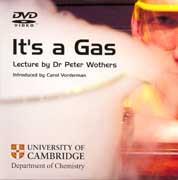 Every year as part of the Cambridge Science Festival, the University of Cambridge's department of chemistry opens its doors to the public and hosts a range of activities. One event, aimed at ages 5+, is a free chemistry demonstration lecture. This DVD is a recording of the 2007 lecture given by Peter Wothers who, as the title suggests, talks about gases.

Wothers starts by talking about the composition of the air and atmospheric pressure, before going on to look at the properties and reactions of each gas in more detail. The main gases covered are oxygen, carbon dioxide, hydrogen and nitrogen with passing reference to a few others. With access to liquid oxygen, liquid nitrogen and dry ice as well as the resources of a large chemistry department, Wothers does demonstrations that are now usually beyond the humble school chemistry department, eg exploding nitrogen tri-iodide and burning a biscuit in liquid oxygen. The only demonstration that I had not seen before was striking a match in a bag filled with hydrogen.

Although teachers will have seen many of these experiments before, their students will not have. The lecture would be suitable in its entirety for many Key Stage 3 science classes and selected demonstrations could be used to support Key Stage 4 lessons. The talk contains little explanation or detail but that is not its aim, its goal is to inspire and entertain. Any science teacher could show the talk to a class and supply the theory behind the reactions.

This DVD is excellent value priced at only £5 and all school science departments should have a copy. I am about to order the 2006 and 2008 lectures, which cover the chemistry of light and the chemicals that make up the world around us.